BIMSTEC gets ‘momentum’ as SAARC in ‘coma’ 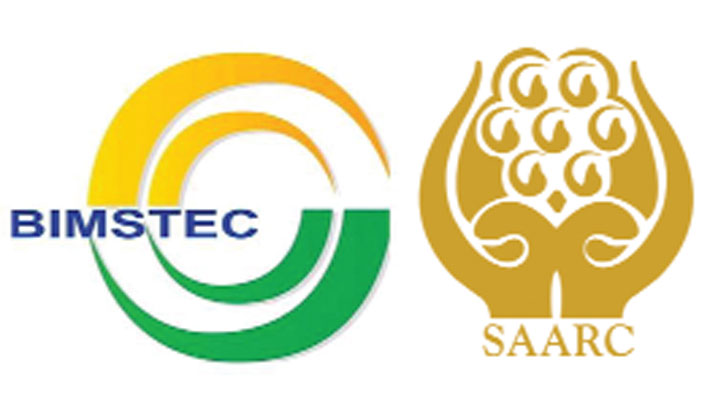 The seven-nation Bay of Bengal Initiative for Multi-Sectoral Technical and Economic Cooperation (BIMSTEC) celebrates its 22 birthday today amid new “momentum” as the South Asian Association for Regional Cooperation (SAARC) went into a state of “coma” due to Pakistan’s act of patronising and exporting terrorism, according to diplomats in Dhaka and New Delhi.

A BIMSTEC spokesman said the actual birthday was on 6 June and it was being celebrated today due to other events like Eid.

Both India and Bangladesh stayed away from the last scheduled SAARC summit in the Pakistani capital Islamabad forcing its abandonment and there has been no indication when and if it would take place. The ties between Dhaka and Islamabad is currently at its worst, while New Delhi ordered air strikes deep into Pakistan after militants, allegedly patronised by Pakistan, killed 40 Indian soldiers causing a further deterioration of ties between the two South Asian countries.

Indian Prime Minister Narendra Modi made it clear that his country was not interested in SAARC by only inviting leaders of the BIMSTEC, which also technically left out Pakistan which many commentators called a “slap on the face of Prime Minister Imran Khan.”

Following the developments, diplomats of both the countries told this correspondent that the Dhaka-based BIMSTEC was currently in the centre stage of the region and there was no serious development in the Kathmandu-based SAARC.

Asked if SAARC is dead, Bangladesh Foreign Secretary M. Shahidul Haque told the Daily Sun that “SAARC has lost its strength ... technical activities are on.” He also told that an organisation which loses its strength means it is “dead”. He refused to comment further.

However, when pursued further an official of the Ministry of Foreign Affairs (MOFA) requesting anonymity said, “No summit meetings means no policy decisions or directions .... without those how can an organisation survive ... it is in a state of ’coma’.” MOFA sources squarely blamed Pakistan for pushing SAARC to its near-dead state, saying Islamabad has been interfering in Bangladesh’s internal matters starting with its stand on the execution of Bangladesh’s 1971 war criminals to alleged patronisation of Islamic militants.

“Bangladesh, as the initiator of the SAARC process, remains steadfast in its commitment to regional cooperation, connectivity and contacts but believes that these can only go forward in a more congenial atmosphere,” a MOFA statement said while reasoning why it has pulled out of the Islamabad summit.

Both Modi and Jaishankar chose BIMSTEC members Bhutan, Sri Lanka and the Maldives for their first visits technically avoiding any country that belonged to SAARC only.

In the recent summit of the Shanghai Cooperation Organisation (SCO) Modi in a veiled attack on Pakistan said “countries sponsoring, aiding and funding terrorism must be held accountable.... countries must come out of their narrow purview and unite against the menace of terrorism.” Prime Minister Sheikh Hasina stood firm on her “zero tolerance” on terrorism and tough measures to crush such activities yielded good results since the café tragedy in Dhaka.

The 19th SAARC summit in Pakistan was postponed indefinitely after six other member states followed India in pulling out from the event citing mainly terrorism issues.

Pakistan has been aggressively seeking support from other South Asian nations to host the next SAARC summit in Islamabad, but analysts doubt if India would agree as it planned “to isolate Pakistan”.  M. Shahidul Islam, secretary general of BIMSTEC, told this correspondent that the organisation has got “momentum” in recent months despite the fact it was set up in 1997. “Its interest previously was minimal … The proof is its secretariat in Dhaka set up years after in 2014,” he said. Islam, a career Bangladeshi diplomat was elected to the post in 2017 after returning home from France, said the activities now included submission of a draft charter, rules of procedure, free trade zone and development fund, besides seven officials from the seven member countries have been deputed to the secretariat of which Bangladesh, Bhutan, India, Myanmar and Nepal were already in Dhaka. Sri Lanka and Thailand will also send their officials soon.

“BIMSTEC’s main idea is to make maximum utilisation of minimum resources of the region and implement plans linked to connectivity and trade through friendly negotiations,” he said.

One BIMSTEC source told this correspondent when asked if this organisation would meet the same fate as SAARC due to the Rohingya refugee crisis between Bangladesh and Myanmar, he said he did not think so as problems were not insurmountable.

“In the 3rd BIMSTEC meet of security chiefs, the Rohingya crisis was discussed with a friendly approach … thus unlike SAARC there will be a scope to discuss bilateral issues,” he added.

Pallab Bhattachary, a veteran Indian journalist, said “SAARC appears to be doomed, but India has to be the lifeline of BIMSTEC to ensure its success.”

“After what Indian officials describe as Pakistan’s obstructionism, India has looked at BIMSTEC for regional cooperation and connectivity. BIMSTEC is also where India’s ‘neighbourhood first’ and ‘Act East policies’ overlap,” Constantino Xavier, a fellow at the Brookings India, was quoted as saying by the Hindustan Times.