None can destroy Awami League: PM 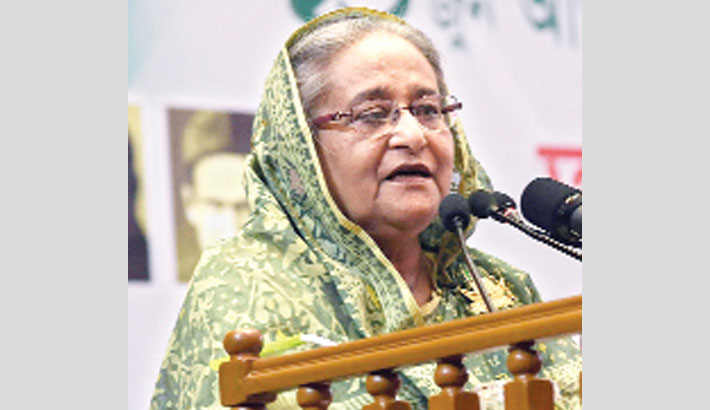 Prime Minister Sheikh Hasina on Monday said none can destroy Bangladesh Awami League as it is a well-organised political party brightened with numerous achievements gained during its 70-year history of struggle.

“Awami League is one of the well-organised oldest political parties in this subcontinent. None could tear the party to shreds through hundreds of attacks and will not be able to do so in the future, Inshallah,” she said.

The premier came up with the remarks while addressing a discussion organised by the Awami League at Bangabandhu International Conference Centre in the capital, marking its 70th founding anniversary.

Sheikh Hasina, also the president of the party, said the Awami League is a piece of diamond.

“Whenever diamond is cut into pieces, it shines more. The Awami League faced numerous attacks since its inception and the party strengthens whenever it faces attacks,” she said.

The historic party led the country’s war of independence in 1971 and played a strong role in all the democratic movements during Pakistan and later in Bangladesh.

The Awami League was floated as a new political party at the historic Rose Garden in the Old City of Dhaka on June 23 in 1949.

Moulana Abdul Hamid Khan Bhasani and Shamsul Huq were unanimously elected president and general secretary respectively of the new political party that emerged as a rival of then ruling Muslim League.

In its 70-year-long glorious history, the party led the 1952 Language Movement and the 1971 War of Liberation and fought successfully against exploitation, disparity and violation of basic human rights with massive public support.

Sheikh Hasina said the Awami League has now become a bright organisation with the achievements gained during its 70-year history of struggle.

The premier expressed the hope that Awami League will strengthen further as it did gradually in the past.

“AL is so deeply rooted among the people of Bangladesh that none could uproot it despite making hundreds of efforts in the past and can never do so in the future,” she said.

“It is a proven truth that the country gets development only when Awami League comes to power,” Sheikh Hasina said adding that even whatever development was gained on the soil of Bangladesh during pre-liberation war period came when Awami League had been in the government during 1954-1958 period.