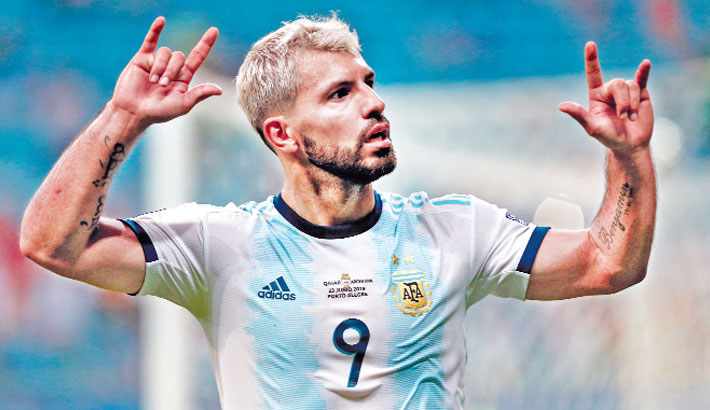 An early goal by Lautaro Martinez and Sergio Aguero’s late second gave Argentina a 2-0 win over Qatar on Sunday that qualified them for the Copa America quarter-finals.

Argentina, who finish second in Group B behind Colombia, will play Venezuela at Rio de Janeiro’s iconic Maracana stadium in the quarter-finals, while tournament debutants and guests Qatar are out.

Asian champions Qatar made a calamitous start when a weak headed clearance from Tarek Salman fell to Martinez 12 yards out, but the Inter Milan forward sent his volley over the top.

With the weight was lifted from Argentina’s shoulders, they played with a freedom expected of a side boasting talents such as Aguero and five-time Ballon d’Or winner Lionel Messi.

Qatar played with limited ambition but their talented forwards looked dangerous when they did venture into the final third.

Messi burst into life with an acceleration towards Qatar’s area before slipping a pass to Aguero, who dragged his left-footed shot wide under pressure.

Qatar were sporadically dangerous on the break and Portuguese-born Ro-Ro stole in at the back post to meet a Karim Boudiaf cross but couldn’t direct his volley on target.

Argentina almost scored a second after Qatar goalkeeper Saad Al-Sheeb spilled a header by Martinez causing a scramble in the box, but neither Aguero nor Martinez could poke the ball home. Aguero finally scored the goal his industry deserved with a purposeful run past two defenders before sending a cross-shot into the far bottom corner eight minutes from time.

Already guaranteed of winning the group, Colombia’s Portuguese coach Carlos Queiroz made 10 changes to his line-up, with only Juventus forward Juan Cuadrado retaining his place.

They took the lead just after the half-hour mark when Gustavo Cuellar scored through goalkeeper Roberto Fernandez’s legs from a tight angle. In the second half Colombia had a goal and a penalty award chalked off by VAR.