Morgan won’t tell fans how to react to Smith, Warner 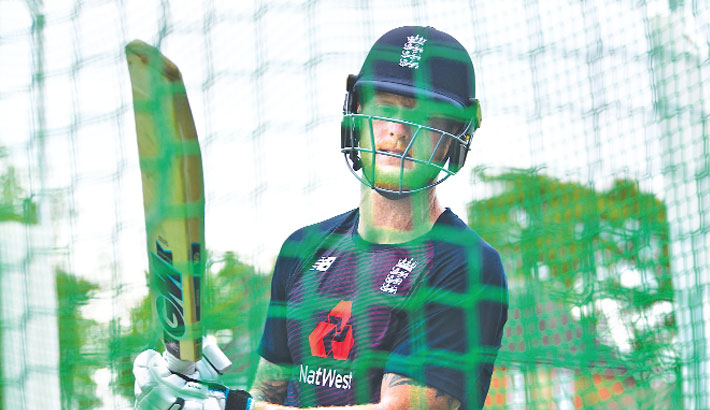 England all-rounder Ben Stokes bats in the nets as he attends a training session at Lord’s Cricket Ground in London on Monday, ahead of their 2019 World Cup match against Australia today. – AFP Photo

England captain Eoin Morgan insists it is not his job to tell supporters how to react to shamed Australia stars David Warner and Steve Smith when the arch rivals meet in a crucial World Cup clash on Tuesday.

Warner and Smith have found themselves booed by some fans in England after returning to international cricket following year-long bans for ball-tampering.

Australia coach Justin Langer has pleaded for the taunts to stop, with India captain Virat Kohli and Pakistan skipper Sarfaraz Ahmed telling their supporters to lay off the duo.

But, although the Australia clash is being played at Lord’s — the ‘home of cricket’ where crowds are traditionally polite — Morgan refused to issue a plea to respect Warner and Smith.

“I’m not expecting anything. I think fans and supporters up and down the country will have different reactions, as they will around the world. So we’ll see,” Morgan told reporters on Monday.

“Supporters pay a lot of money, they do. And sport is beautiful in many ways, because it attracts people from far and wide.

“And you often see crowds offering support to both sets of players in the grounds.”

Morgan added: “You don’t know how sports fans will react.

“Just because two guys have been punished, served their punishment and returned to play, it doesn’t mean they will be accepted back into the cricket community straight away. It will take time.”

Asked for his opinion of Bairstow’s comments, Morgan said: “I don’t have a view on it. I think every instance is different, every team is different.

“I believe that was a long time ago under a different regime. I don’t know.”

Defeats by Sri Lanka and Pakistan mean England could need to win two of their three remaining group matches against Australia, India and New Zealand to reach the semi-finals.

But Morgan tried to play down the significance of the latest clash with their old enemies by saying: “It’s not must-win yet. We don’t need to win every game to get to the semi-final.”

Meanwhile, Morgan said opening batsman Jason Roy, who has missed England’s last two games with a hamstring injury, would not be fit to face Australia despite batting in the Lord’s nets on Tuesday.

“Jason went for a scan this morning. It’s all positive news, (but) he won’t be fit for tomorrow,” said Morgan.

“We’ll monitor his progress in the week. To put one game on it (for Roy’s return) I don’t think is sensible, let’s just see how it goes.

“It’s Jason Roy, of course he’s a big loss. He’s an outstanding performer for us.”

James Vince has yet to impress as Roy’s replacement, although Morgan insisted: “But I’m confident we have the batting covered. James Vince is an extremely talented, gifted player. You can see that just watching him.

“We’ve every faith in him to go on and get a score at some stage.”