Poverty rate to be cut down to a level less than US: PM 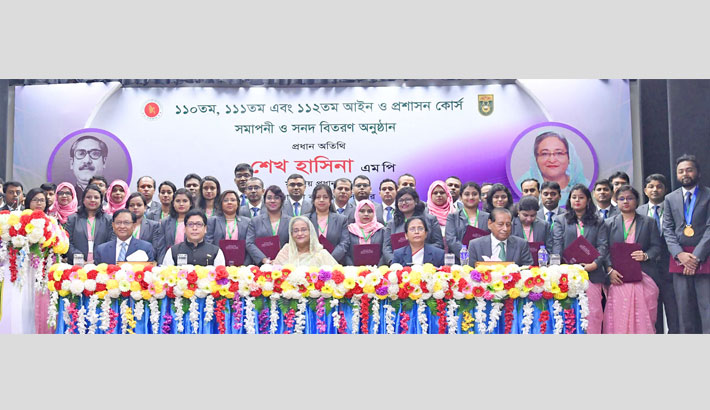 Participants of the 110th, 111th and 112th Law and Administration Courses pose for a photo with Prime Minister Sheikh Hasina at Bangladesh Civil Service Administration Academy in the city on Sunday. - PID PHOTO

Prime Minister Sheikh Hasina on Sunday said the government’s target is to bring down the country’s poverty rate to a level less than what the USA has, reports UNB.

The Prime Minister made the remarks while addressing the closing ceremony of the 110th, 111th and 112th Law and Administration Courses at Bangladesh Civil Service Administration Academy in the capital.

Sheikh Hasina, also the Public Administration Minister, asked the civil servants to render services showing affection and love for the country and its people.

“It’s not only doing job just for job. If you nature the feelings of responsibility, patriotism and affection for the country and its people, and accountability in your mind, the country willsurely prosper,” she said.

About the Annual Development Programme (ADP) for the 2019-20fiscal year, the Prime Minister said now the government has undertaken development projects involving Tk 2.02 lakh crore which was merely Tk 19,000 in the past.

Referring to the development projects she said, “You’ll have to pay greater attention to your duties always so that militancy, terrorism corruption and drug can’t destroy our society.”

Bangladesh Awami League was founded to establish the rights of people. “That’s why the fate of people is changed (improved) when AL comes to power,” she said. Sheikh Hasina said Bangladesh will be built as a developed, prosperous and peaceful country in South Asia by 2041.

Bangladesh is progressing in every arena as Father of the Nation Bangabandhu Sheikh Mujibur Rahman liberated the country, she said.

During the recent OIC conference, the Pakistan Prime Minister wanted to know about the amount of reserve and the size of budget of Bangladesh, she said.

Knowing these, he got surprised and commented that Bangladesh is progressing far from Pakistan today, Hasina said.

The Prime Minister asked the officials who are working at the field-level administration to sort out the problems there and find out solution to those. “You’ll have to work for people. You’ll have to keep eye so that people get justice.”