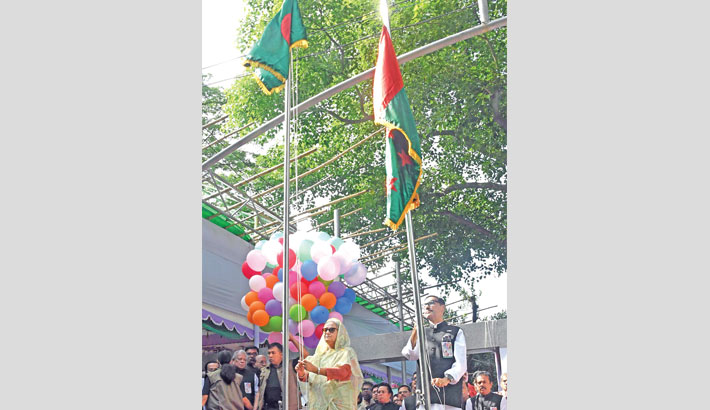 Awami League President and Prime Minister Sheikh Hasina and party’s General Secretary Obaidul Quader are hoisting the national and party flags respectively at Dhanmondi 32 in the capital on Sunday on the occasion of the 70th founding anniversary of the party. – PID PHOTO

Ruling Bangladesh Awami League, the country’s biggest and oldest political party, celebrated its 70th founding anniversary on Sunday with festivity across the country.

The party, which is ruling the country, led the nation during liberation war against the Pakistan occupation forces in 1971 and achieved independence consequently.

The party celebrated the historic day pledging to build a poverty-free developed and prosperous ‘Golden Bangla’ as dreamt by Father of the Nation Bangabandhu Sheikh Mujibur Rahman.

The party was founded on June 23, 1949 at historic Rose Garden in Old Dhaka.

The party’s front organisations and associate bodies organised elaborate programmes across the country to mark the day.

On the day, the party hoisted national flag and party flag at its offices across the country.

She also released pigeons and balloons during inauguration of the programme.

AL General Secretary Obaidul Quader raised the party flag while the national anthem was sung on the occasion.

After placing floral wreath, Prime Minister Sheikh Hasina stood in solemn silence for sometime, showing profound respect to the memory of Bangabandhu, the architect of independence.

Later, flanked by senior leaders of the party, Sheikh Hasina placed another floral wreath at the portrait of Bangabandhu on behalf of her party.

People from all strata, including different political, social, cultural and professional organisations paid tribute to Bangabandhu by placing floral wreaths at the portrait of Father of the Nation.

A delegation of Awami League Central Working Committee led by Presidium member Faruk Khan placed wreaths at the mausoleum of Bangabandhu at Tungipara in Gopalganj in the morning.

Marking the anniversary, the party will also hold a discussion at Bangabandhu International Conference Centre at 4:00pm today.

In its 70-year glorious history, Awami League led the Language Movement in 1952. It restored peace after riots in 1964.

The party also led the six-point demand movement in 1966 and the mass upsurge in 1969.

The party led the movements successfully against exploitation, disparity and violation of basic human rights with massive public support.

The biggest political party of the country led all the democratic, political, social and cultural movements.

Later in 1971, the party woke the nation through the historic 7th March Speech of Bangabandhu Sheikh Mujibur Rahman and led the liberation war against the Pakistan occupation forces, achieving independence for the nation.