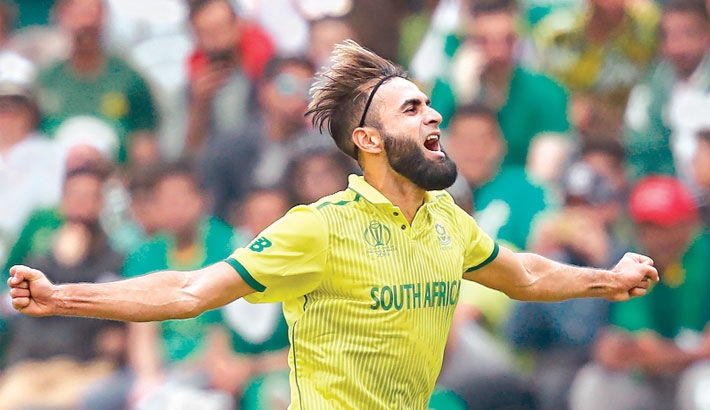 South Africa spinner Imran Tahir celebrates after taking a catch off his own bowling against Pakistan during their 2019 Cricket World Cup group stage match at Lord’s Cricket Ground in London on Sunday. — AFP Photo

The two wickets gave him 39, one more than fast bowler Allan Donald, who retired after the 2003 World Cup.

Tahir, the oldest man in the tournament at 40, induced Fakhar Zaman to lob a catch to first slip in the 15th over, and brilliantly caught Imam-ul-Haq off his own bowling in the 21st. Pakistan was reduced to 98-2.

Tahir, as always, celebrated by running around the Lord’s ground with arms out like he was flying.

He has 10 wickets in this tournament.

Pakistan and South Africa both need a victory to keep their slender hopes of qualifying for the semi-finals alive.

With only one win apiece, neither side have any margin for error in the first match of the tournament to be staged at Lord’s, cricket’s spiritual home, in north London.