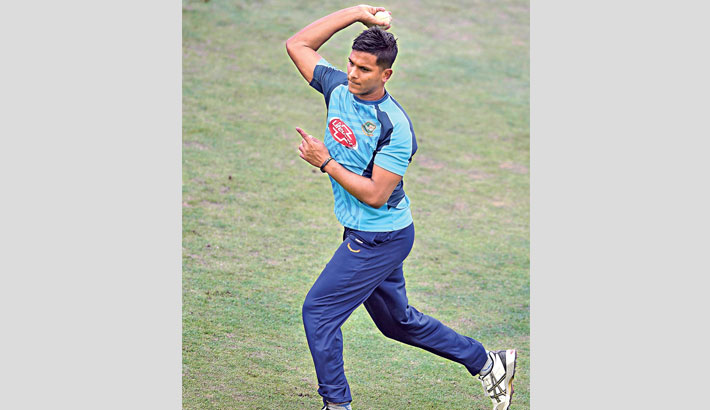 Bangladesh pacer Mohammad Saifuddin takes part in a training session at the Rose Bowl in Southampton, England on Sunday, ahead of their match of the 2019 Cricket World Cup against Afghanistan today. — AFP Photo

Bangladesh skipper Mashrafe Mortaza thinks that, not holding up ‘nerve’ at crucial moments has been a real problem for Tigers which has damaged Bangladesh’s prospects and reflected on their fielding performance.

“Injury is the main reason but I think players can’t hold up their nerve and get nervous,” Mashrafe told reporters a day after the match against Australia when asked about the main reason behind their fielding misery,’’ Mashrafe was quoted in leading Bengali website.

“Our players can’t take decisions quickly about the right side of the pitch where they need to throw the ball or while picking up the ball from ground. I think this is more of a nerve issue,” added Mashrafe.

During their match against Australia, a bit of more athleticism from Bangladeshi fielders in the ground could have saved around 20-30 runs that would be well enough to change the momentum for Bangladeshi batsmen, especially considering the way Mushfiqur Rahim and Mahmudullah Riyad had built up their partnership in the middle.

It was probably the most entertaining run-fest in the ongoing World Cup so far.  If the Tigers did not make some small mistakes throughout the game, it could have been a closer one. It also was a lesson for Tigers that against top teams like Australia, you cannot afford those slips.

Like Sabbir Rahman, who was brought into the squad for being the best fielder available because Tiger’s needed to put some extra focus on fielding department in such a big match. But with one catch drop and one run out chance miss of David Warner who later left the crease with 166 runs, proved how worthless selector’s decision of including him in the playing side was as he also went out for a duck while batting.

Though Mashrafe blamed both his bowling and fielding department as he said Warner and Usman Khawaja’s partnership had built the pressure on the fielders so that they were not as electrifying as they were supposed to be which had also effected the bowlers mindset. It was the same scenario against England.

“In many cases, when our bowlers face difficulty to break a partnership, their body language falls at that time. When Khawaja arrived in the crease, our players were brilliant in field in the first 7-8 overs during his partnership with Warner. But when the both batsmen got set, their mindset was not best,” told Mashrafe.

“In such matches, fielders have to keep the opponent under pressure by producing their best fielding. Fielders needed to save some boundaries and singles to keep the bowler inspired. Both in these two matches (Australia and England), we gave away some extra runs and boundaries that had effected bowler’s mind set,” told Mashrafe.

In Cardiff against England, players failed to attack the oncoming balls, allowed easy twos and threes- apart from their regular fumbles.

Though Bangladesh fielding was much better against New Zealand but they still made some silly mistakes did not let Bangladesh bring the match home. For example when wicket-keeper Mushfiqur Rahim dislodged the bail with his elbow before the ball was in his hand while there was a clear chance of run out that could force Kane Williamson from the crease.

Again against the South Africa, team’s senior member Mahmudullah Riyad misjudged and picked up the ball quite late while there was a chance of run out at 33rd over. And during 35th over, Dussen tried to tap one straight to cover-point and looked to took off, but the fielder - who’s right there for Bangladesh, just couldn’t balance himself and Dussen got a life there in the crease.

Despite the fact that, there had been some lack of fielding perfection from the senior members of Tigers which were clearly visible, Bangladesh fielding coach Ryal Lyall Cook said senior members who are playing for Bangladesh for a long period of time, give their effort more in batting and bowling. Though he will never question anyone’s work ethics as he said players need to work on that zone where they need to improve.

“We have a set of players who have been playing cricket for past 15-16 years. They know everything they should do in the field.  But fielding does not get as much as priority like batting or bowling does. I won’t question their work ethics. Everyone has their strong and weak point. So someone has to improve their ability of taking a catch while some other has to improve in ground fielding or throwing. They have to keep that mind set of improving where they are lacking,” said Ryall.

“Physical ability is a big factor here. I have worked in Big Bash; their players throw balls from boundary line like a bullet. They are natural athletes. It’s tough to keep up the same strength level like them,” felt Cook.