I am desperate to win World Cup: Rhodes 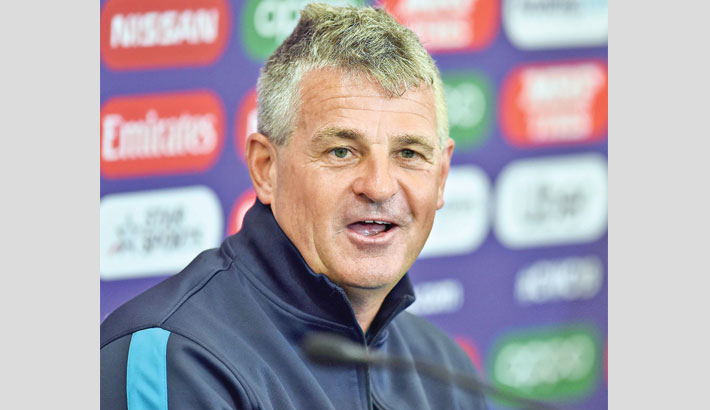 Bangladesh Head Coach Steve Rhodes announced that he is desperate to win the ICC World Cup 2019 as they prepare themselves to take on Afghanistan at Rose Bowl in Southampton on Monday.

The Tigers’ prospect to reach the last four race looked bleak following their 48-run defeat at the hands of might Australia on last Thursday.

But Sri Lanka pulled off a stunner by upstaging tournament favourites England, a win that also did Bangladesh a favour. Their semifinal hope has now been revived out of nothing but based on the condition that they would have to win their rest of the three matches.

“I’m desperate to win this ICC World Cup,” Rhodes told reporters at the press conference ahead of the Afghanistan match on Sunday.

“That’s the challenge and that’s the mountain to climb,” he said.

“We all know from watching, if you really break it down and we do win these coming matches, we only need five games, and we’ve won the World Cup. That’s one way of looking at it if you think of them as knockout games. Of course, that is not easy and the first challenge and the first step is Afghanistan,” he added.

Rhodes added that as time passes, wicket is getting slower and he believe this will suit his bowlers and the batsmen as they progress further in the tournament.

“The wicket was a little bit slower than the wickets we’ve been playing on, and it turned a little bit. We’re playing on the same wicket, so that’s useful to know. Secondly, you’ve all seen where the wicket is on the ground. It’s right in the middle, and it’s a huge field,” said Rhodes.

“So we’re going back to the old ages of 1980s and 90s, when you had some big grounds to cover for boundaries. So the six hitting and the four hitting might be less likely. We’ll certainly have to run hard and earn our singles and twos and turn them into threes. So that’s an important aspect. Then with the ball, I think, it may well suit some of our bowlers, and we’re looking forward to that challenge,” he added.

Rhodes also cleared the air regarding the Saifuddin’s injury as he insisted he was having back pain and insisted report of Saifuddin overplaying his injury is not true.

“First of all, physically he’s fine. He needed rest. His back was giving him some real problems. That’s the real reason why he missed that last game against Australia. It was a physical thing. He couldn’t bowl. You’re not going to pick a player who can’t bowl. His mental state, I actually — I think this is a really, really important issue because the reports that came out were untrue. There were reports about a meeting that I had regarding a replacement with Mashrafe and the man they had selected, but that didn’t take place,” said Rhodes.

“So I would like you guys, before questioning the integrity, and I appreciate that’s it’s probably people not in the room here, but before questioning the integrity of players, make sure your information is 100 percent correct. I think that’s the key message here. Most of the Bangladesh reporters here as well as the staff we’re desperate for us to do well.  If it’s a lie and it actually puts a player in a very difficult position then it’s not good for that player and that’s not good for Bangladesh,” he concluded.