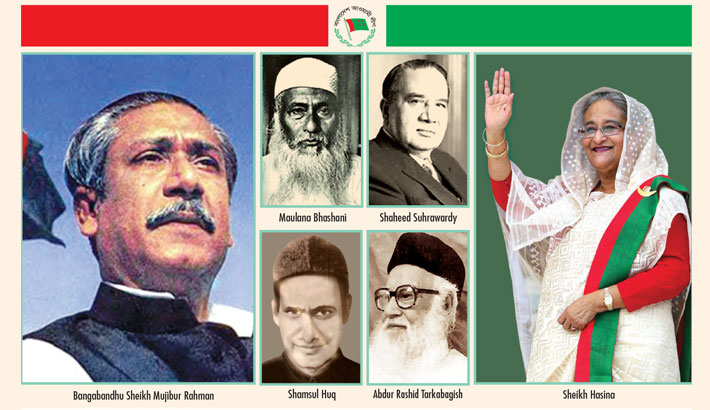 The ruling Awami League of Prime Minister Sheikh Hasina is set to celebrate its 70th founding anniversary today with the target to turn the country into a peaceful abode by establishing good governance and balanced development.

The historic party which gave leadership to the country’s war of independence in 1971 and played a strong role in all democratic movements during Pakistan and later in Bangladesh, is set to celebrates its founding anniversary through festivity and month-long programmes across the country from today.

The Awami League was floated as a new political party at the historic Rose Garden in the Old City of Dhaka on June 23 in 1949.

Moulana Abdul Hamid Khan Bhasani and Shamsul Huq were unanimously elected president and general secretary respectively of the new political party that emerged as a rival of the then ruling Muslim League.

The newly formed AL also elected Sheikh Mujibur Rahman as the joint secretary of the party.

In its 70-year-long glorious history, the party gave leadership in the 1952 Language Movement and the 1971 War of Liberation, and fought successfully against exploitation, disparity and violation of basic human rights with a massive public support.

Despite the party’s hard-earned glory, some people criticize the party for which some of its leaders are to be blamed for their controversial activities.

Obaidul Quader said the country would move towards development under the dynamic leadership of Prime Minister Sheikh Hasina.

“Though Awami League is a big party, none can raise any allegation of corruption against any minister and central leader,” he said.

Despite party president and Prime Minister Sheikh Hasina’s directive to work for the people, the party apparently fails to control some of its rowdy leaders, creating a sense of frustration among the people.

Critics also say that the party and government has become which was unacceptable.

Asked about the allegation, AL’s organizing secretary AFM Bahauddin Nasim binned it  saying that the party president has played a healthy role to keep the party out of the influence of the government. 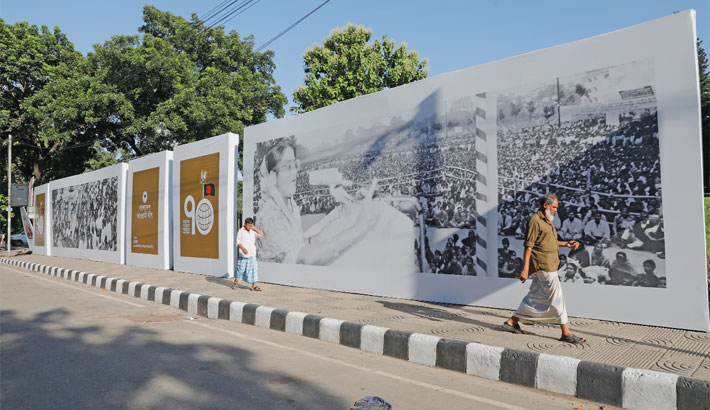 A footpath in the capital’s Secretariat area has been decorated with large posters on the occasion of the 70th founding anniversary of Awami League. The ruling party celebrates its birthday today through various programmes.    —Kamrul Islam Ratan

The shining image of the Awami League since its inception is being tainted due to some of its activists, including lawmakers, for their alleged involvement with misdeeds to establish supremacy in their areas.

Even, many incumbent lawmakers worked against the party-backed candidates during the recently held Upazila Parisahd polls.

The organizational strength seems weakening as some leaders, including ministers and lawmakers, tarnishing the party’s image were allegedly involved in corruption, crime and killing, which have painted a wrong picture of the party in front of the people, they observed.

Workers Party of Bangladesh president Rashed Khan Menon, an ally of the ruling party, on June 19 in parliament, criticized the government on various issues, including the election system.

“Upazila election is an example. Voters could not be drawn to the polling booths despite announcements in mosques. It is not only dangerous for elections but also for democracy,” he said.

Menon, who was a minister of the last Awami League government, said that if different parts of the government control the elections, then political parties will lose their interest not only in the elections, but also in running the state. “This is applicable for all and also for the Awami League.”

Despite various measures taken by the Election Commission, majority number of voters did not turn up for voting in UZ polls.

Analysts also blame a section of AL leaders— both from central to local level – for their alleged involvement in “snatching the voting rights” of the people.

Recent UZ polls also put a stigma on the fate of AL as most of its candidates won the polls snatching the ballots, prompting the opposition parties, including its partners to raise voice over the election system.

AL joint general secretary Jahangir Kabir Nanak said that their target is to develop a prosperous country along with peaceful abode for all.

“We have faced a lot of troubles during the long period. The party will take zero tolerance policy against those who will tarnish the image of the party,” he said.

Apart from these, the AL government has to rely on the administration in facing the opposition and other misdeeds being carried out by the vested quarters as the leaders and activists have been engaged in maximizing wealth instead of organsational activities.

The ruling party has taken various programmes to celebrate the founding anniversary day in a befitting manner.

As part of observance of the historic day, the AL will hoist national and party flags in party’s central office and its offices across the country since dawn.

Leaders of the party will pay tribute to the portrait of the father of nation Bangabandhu Sheikh Mujibur Rahman at Bangabandhu Bhaban at Dhanmondi in the capital.

Marking the anniversary, the party will also hold a discussion at Bangabandhu International Conference Centre at 4:00pm tomorrow.