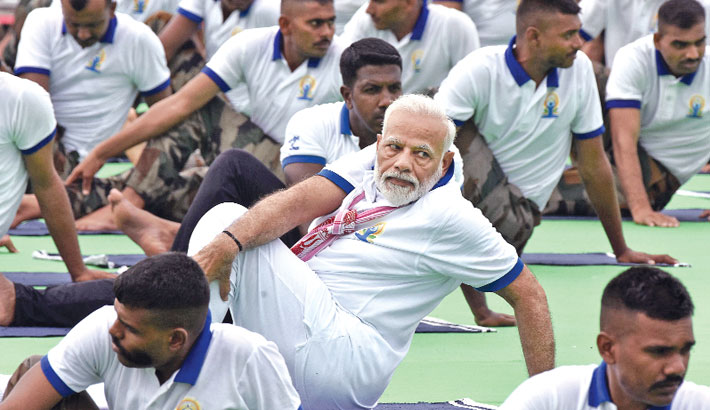 Ranchi: Indian Prime Minister Narendra Modi on Friday said yoga is above caste, religion, colour, gender and region as he meticulously performed various asanas with around 40,000 enthusiasts at the Prabhat Tara ground here to mark the fifth International Day of Yoga, reports PTI.

“We should make efforts to take yoga from cities to villages and tribal areas. Yoga is above religion, caste, colour, gender and region, it is above everything,” he told the gathering.

The main event on Yoga Day was held in the Jharkhand capital. The International Day of Yoga is being celebrated annually on June 21 since 2015.

“It (yoga) is constant and evolving for centuries. The essence of yoga has been stable and remained the same—healthy body, stable mind, spirit of oneness. Yoga has provided a perfect blend of knowledge, karma and bhakti,” the prime minister said.

Expressing concern that young people were becoming vulnerable to heart ailments, Modi said, “Yoga can play a huge role in tackling the issue and hence, this year’s theme is ‘Yoga for Heart’.”

Heart-related ailments have increased manifold in the country, for which awareness on heart care, prevention through yoga and proper treatment are necessary, the prime minister said.

Modi also said the government has been working to make yoga a pillar of preventive healthcare.

“We can say, in India, awareness of yoga has reached every corner and section. From drawing room to boardroom, from parks in cities to sports complex, all around yoga can be experienced,” he told the gathering.

Noting that good health motivates to scale new heights, Modi said, neither dreams can be realised nor objectives achieved through a tired body and broken mind. “We should make efforts to take yoga from cities to villages and tribal areas,” the prime minister said.

“Yoga should be taken to tribal homes and made an inseparable part of the life of the indigenous people.”

He stressed that for yoga to become popular, infrastructure for it must be strengthened. The government, he said, was working on it.

As the world is adopting yoga, Modi said, research on yoga should be given emphasis for providing updated information about yoga, just like a phone is updated with the latest software.

“With the increasing importance of yoga, the role of trainers and institutions related to yoga will also increase,” he said. “Peace and harmony are related to yoga. People across the world must practice it,” Modi said.

On his way out of the venue, Modi shook hands with several participants, including school children, who reached out to the prime minister over barricades.

Soon after finishing his address to a packed ground, Modi, donning white tracks, white T-shirt and a scarf, got down the stage and joined the yoga enthusiasts as a trainer conducted various yoga asanas and pranayam.

The congregation also did breathing exercises before meditation.

Earlier, enthusiasts and volunteers bee-lined towards the ground from 3 am and by the time Modi reached the venue it was a sea of white T-shirts, prompting the prime minister to say, “I am happy to see you coming early in the morning.”

He waved at the people, who took selfies after the yoga event concluded.

The prime minister, who reached Ranchi Thursday night and stayed at the Raj Bhavan, said he chose to join the day in Ranchi, as the city is very dear to him.

“I launched Ayushman Bharat on September 23 last year and want to take the yoga campaign to a different level with all of you.”

Elaborate security arrangements were in place at the venue. A drone hovered above as part of security measures.

A total 400 makeshift toilets, over 200 drinking water kiosks, eight medical teams, 21 ambulances, jawans of NDRF and more than 100 CCTV cameras were in place at the venue.

A total 28 display screens were installed at the venue.