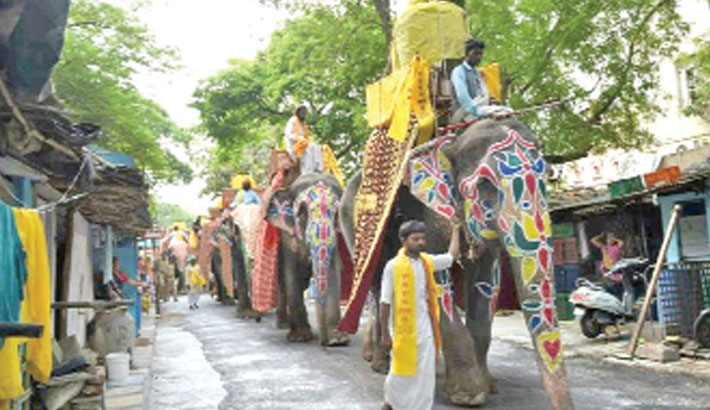 Indian wildlife activists on Friday vowed to go to the Supreme Court to halt an operation to take four elephants on a cross-country train journey to take part in a Hindu festival, reports AFP.

Opponents of the plan to move the elephants more than 3,000 kilometers (1,900 miles) from Assam state in the north to Gujarat in the west say the three day trip in India’s blistering summer heat poses a grave threat to the animals’ health. The four elephants are to be sent to the Jagannath temple in Gujarat’s main city, Ahmedabad, where a well-known Hindu festival begins on July 4.

Many temples in India, including the Jagannath, traditionally parade decorated elephants at festivals. Activists want the practice banned.

“Experts have warned of the dangers of transporting these elephants such a huge distance, forcing them to work in heat,” said Manilal Valliyate, a veterinarian and head of the Indian branch of People for the Ethical Treatment of Animals (PETA).

They also believe there is a risk the elephants will end up in the illegal wildlife trade, Valliyate said.

He added that moving the elephants would violate a 2016 Supreme Court order banning the transportation of the protected species from one state to another. “Assam based animal welfare groups are planning to take this important issue to the court, and we will provide necessary support,” he said.

Assam MP Gaurav Gogoi has also called on the environment ministry to stop the railway journey.

“India is reeling under a severe heatwave at the moment, and roughly half the country is enduring its worst drought in six decades,” he said in a letter.

The elephants are currently in Tinsukia district in the remote northeastern state. Two were captured from the wild last year.

The animals are to be put in carriages without air conditioning that will be attached to a passenger train. Temperatures along much of the route have been around 40 Celsius (104 Fahrenheit) in recent weeks. Dozens of people have died from severe heat in recent weeks.