Muggers active in city despite drive 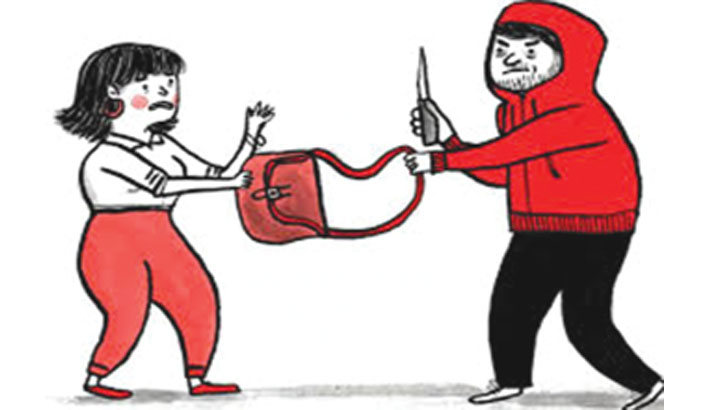 Mugging gangs are active at various parts of the capital despite continued drives and vigilance of the law enforcing agencies, said sources at Rapid Action Battalion (RAB) and Detective Branch (DB) of Police.

The gang members often don’t hesitate to kill their victims if they try to resist the attempt to rob them.

Each of the gangs has their designated area and generally, they do not enter the area of other gangs. Some of the groups mainly rob valuables and cash of commuters while the others stanch vehicles and goods.

The car lifting gangs don’t have any specific areas, but the goods snatchers are mainly active in Sadarghat, Karwan Bazar, Islampur, Gabtali and other parts of the city.

All the groups have their own fund to release their members whenever they get arrested.

With face-to-face mugging, the snatchers are now applying various tactics to stanch.

According to RAB-4, a gang mainly snatches CNG-run autos.

Some auto drivers are also members of the gang. They take the autos to the gang’s den and other gang members phone the owners of the autos and ask to meet them. When the owners meet, they see the drivers remain unconscious and the autos are under the clutch of the snatchers. Then the muggers offer the owners to release the autos and drivers in exchange for Tk 60,000-100,000 for each.

Sources at RAB-4 said the gang members also sell juice at CNG-run auto stands. When any auto driver drinks the sedative-mixed juice from them, other members of the gang hire the three-wheeler to dump the driver when he becomes unconscious.

RAB said they arrested many members of the vehicle lifting gang, including six from Darus Salam, Demra and Dakshinkhan on June 17.

On June 18, RAB-1 arrested Shahin Mia alias Black Shahin,24, Manjurul Islam alias Mizu,24, and  Farhad Hossain,26, who along with other members killed Sakib Hossain,20, and injured his friend Shipon Mia,19, at Batulia in Uttarkhan on June 15.

During primary interrogation, they said they are members of a snatching gang. They rob visitors of the area after intentionally locking into conflict with the sightseers.

RAB-3 said a gang roams around Rampura, Hatirjheel, Gulistan and Madhubagh and to snatch valuables and cash of commuters.

RAB-10 said a gang is active in Sadarghat, Signboard and adjacent areas to rob commuters.

The force arrested 11 members of the racket on June 11.

DB police said some mugging gangs who are drug addicts snatch valuables and cash on weapon points and often drug their victims.

About 65 members of a gang were arrested from New Market, Fakirapool, Kuril Biswa Road, Gulistan, Wari and Uttara recently.