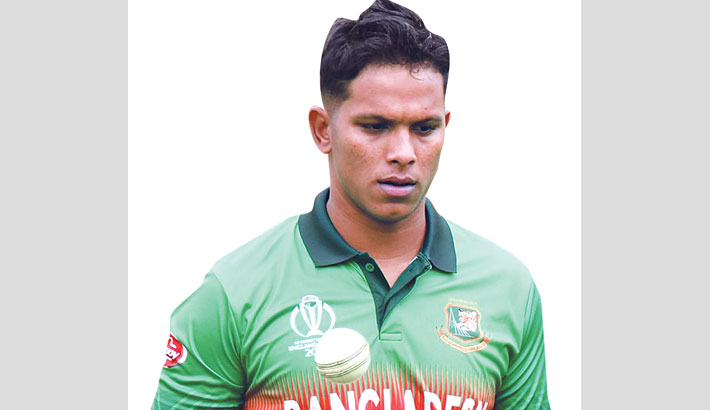 All-rounder Mohammad Saifuddin injury’s became the talking point as within the team, doubts were raised about his back pain ahead of their game against Australia at Trent Bridge on Monday.

Doubts were raised after out of nowhere Saifuddin claimed that he is having pain on his back that he sustained during the game against West Indies.

Questions were raised why he did not ask treatment immediately during the match against West Indies and instead just informed when the team management was looking to select the playing XI.

“I am not sure whether he is having back pain but as he insisted we have to believe him,” said a high ranking Bangladesh Cricket Board (BCB) official on request of anonymity who also admitted that some senior players were quite disappointed to learn that he was not available.

Bangladesh skipper Mashrafe Mortaza said earlier that Saifuddin has the potential to serve Bangladesh for 10-12 years. But some of his (Saifuddin’s) recent activities have inspired some doubts. How Saifuddin will resolve these doubts remains to be seen as his absence against West Indies during the Tri-nation Series in Ireland was also not taken very well by the team management.

Several players inside the dressing room whispered their doubts about whether it was really an injury that prompted him to be out of the game against Caribbeans as far as ensuring a place in the final was concerned.

It was a very important match and if Bangladesh lost the encounter then the calculation of points table could have swung. Fortunately nothing like that happened.

But Saifuddin played in the final which was held just two days later and more amazingly he never looked to be carrying any niggles whatsoever.

According to sources inside the team management, Nottingham’s batting friendly wicket and the murderous form of Australian batsmen played a big part behind Saifuddin opting out of the match stating injury issues.

During the last edition of Bangladesh Premier League (BPL), Saifuddin was cautioned by Comilla Victorians’ management not to stage any drama regarding injuries and this act itself speaks volumes about the insight of the people around him both at the club level and in the national dressing room.

Saifuddin’s decision to play in the Dhaka Premier Division Cricket League (DPL) also remained a field that needed to be monitored by BCB as he was supposed to take injection at that time for his tennis elbow injury instead of playing the tournament.

Due to the tennis elbow issue in his right hand, he fielded inside the 30-yard circle but did not express the wish to skip matches as he was facing no problem in batting or bowling and only struggled to throw from the deep.

To recover from the injury, special injection was a must but after injection he required a three-week rest and because DPL commitments he opted to skip the injection. Though the injury didn’t trouble him in World Cup, there is always a chance that it was not fully cured. Thus, there is a risk element attached with his tennis elbow.

However, Bangladesh captain Mashrafe Mortaza hasn’t expressed any disbelief regarding Saifuddin in front of the media apart from stating that Saifuddin will return back soon.

“Between the match, physio, was unable to check him. I hope he will recover quickly. Of course he is taking wickets in every match and giving us breakthrough in tough situations,” said Mashrafe.

“Team will obviously miss an in-form cricketer. So, of course we have missed him and I hope he will play in the next match,” he added.

Whether Saifuddin can resolve the doubts between his colleagues in the dressing remains to be seen in the upcoming days.