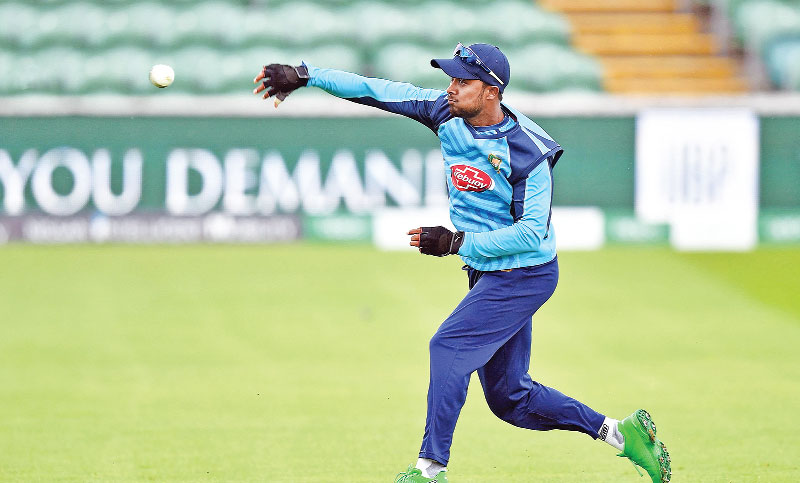 Bangladesh fielding had been quite consistent in the recent past but that hardly remained the same as they met Australia in their sixth match of ICC World Cup 2019 at Trent Bridge on Thursday.

Australia piled up huge 381 runs losing 5 wickets on the back of a scintillating century by David Warner, who looked to be playing shots all around the ground.

But the left-hander can consider himself lucky as Tigers’ best fielder Sabbir Rahman spoiled the opportunity provided by Warner on two occasions during his stay at the wicket, with the one coming up at the initial stage while the second came midway into his innings which eventually ended at 166 runs.

Since the birth of the shorter format of cricket, fielding has become more important for a team to win matches as missing out a catch is also considered equivalent to losing a match.

Sabbir, who replaced Mosaddek Hossain due to his shoulder injury, is considered as one of the finest fielder available in Tigers’ dressing room but his performance against Australia looked to have gone down beyond his standard.

Sabbir often claimed that fielding is the most important aspect of him as a cricketer and his passion for fielding is well known to everyone following Tigers but it seemed he was not carrying the composure during the game against Australia which happens to be his first game of the tournament.

When Bangladesh bowlers started bowling against Australia, they knew, they were bowling against two of the best batsmen (David Warner and Aaron Finch) of this ICC World Cup 2019 who were leading the top run getter list of this tournament.

Sabbir was fielding at point while Mashrafe Mortaza was delivering the last ball of his third over to Warner. It was a short ball outside off that prompted Warner to plays an uppish square cut and it went right to Sabbir at point but he didn’t pick it up and got his hands to it and parried it away to square third man.

Immediately, Bangladesh’s body language went down as Warner in company of Aaron Finch punished them without any mercy in front of the nearly packed stands.

After that Bangladesh got themselves in an agonising situation with the question of how costly that drop is going to be for the team as Warner was on 10 runs at that point and if Sabbir could hold on to it that wicket could send Bangladesh not only in a better position but also provide Mashrafe with his second wicket in the ongoing World Cup, who has been harshly criticised for not meeting expectations.

That drop of Warner became more costly until the batsman added another 59 runs when Sabbir again gave Warner another revival as he missed out a run out chance that could send the Aussie batsman back to the pavilion.

It was Mehedi Hasan Miraz’s third delivery of 26th over against Khawaja, a mix-up between the two batsmen took place but Warner survived as Sabbir fumbled. Khawaja came down the track, got to the ball on the full and toe-ended the drive to mid-on, he was always coming for the run, but Warner was hesitating and was late on the start - the fumble by the fielder eventually ended up saving his innings.

Finally when the Australian opener left the crease with 166 runs to his name added 153 runs more since the first catch Sabbir Rahman dropped who considers fielding as the most polished side of him as a cricketer.

Bangladesh will be chasing a record total to earn a win against Australia but had they grabbed those chances things could have been different all together.