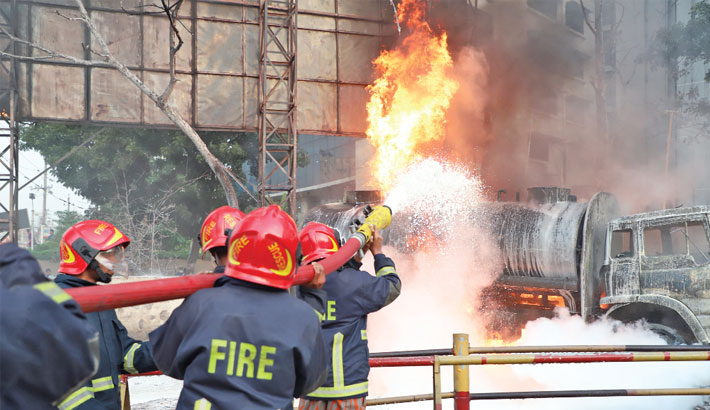 Firefighters spray water onto an oil carrying tank-lorry through a hose pipe to douse a fire that breaks out at a petrol pump in the capital’s Kalyanpur area on Tuesday. —SUN photo

A fire broke out at a petrol pump beside Bangladesh Specialized Hospital at Kalyanpur in the capital on Tuesday.

The fire created panic among patients, doctors and staffs and halted overall activities of the hospital for nearly an hour.

The blaze started at around 5:25pm at Sahil Filling Station beside the hospital in the area, said Rasel Sikdar, duty officer at the control room of Fire Service and Civil Defence headquarters.

Witnesses said the fire originated from an oil lorry parked at the petrol pump.

On information, firefighters rushed to the spot at around 5.35pm and took the situation under control at around 5.54pm.

After working half an hour, 10 units of the fire service was able to take control over the blaze. Fire fighters managed the blaze completely at around 6:12pm, said Rasel.

He said though the fire was in open space, additional fire vehicles were sent as there were residential buildings and the hospital nearby.

“Besides dousing the fire, the firefighters also removed people from the surrounding buildings,” he added. No casualty was reported till filing the report at around 7:00pm. Detailed information about the damage was not available immediately.

The reason behind the incident could not be known instantly.