Use of e-cigarettes rises among teens 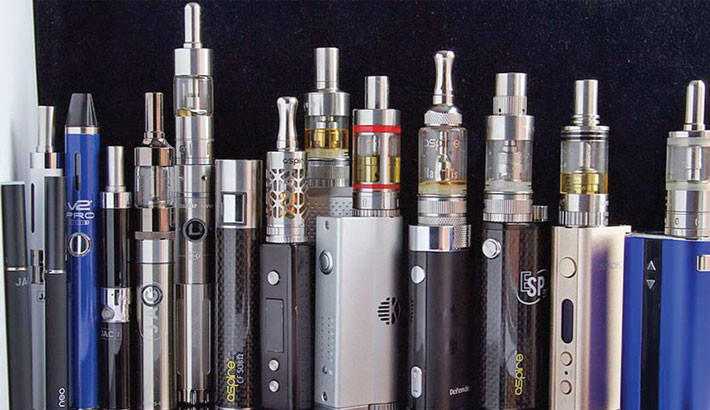 The use of electronic cigarettes also known as e-cigarettes, e-cigs, or vapor cigarettes is increasing among teenagers and youths who are getting hooked to it gradually.

Medical experts said though tobacco is not being consumed, e-cigarette which is battery-operated is not safe either, as people are inhaling nicotine and other harmful chemicals through it.

“e-cigarette is also harmful for people, and it should be avoided right away,” National Professor Abdul Malik, founder and president of National Heart Foundation of Bangladesh (NHFB), told daily sun.

Asked about it, Aminul Islam, Program Officer of National Tobacco Control Cell (NTCC) said: “We have nothing to say about the e-cigarettes.”

All ENDS (but not ENNDS) contain nicotine. Electronic cigarettes, the most common prototype, are devices that do not burn or use tobacco leaves but instead vaporise a solution which the user inhales.

The main constituents of the solution are propylene glycol with or without glycerol and flavouring agents.

ENDS solutions and emissions contain other chemicals, some of which are considered toxicants.

WHO submitted a report on ENDS/ENNDS to the seventh session of the Conference of the Parties to the WHO Framework Convention on Tobacco Control (COP7), which took place in New Delhi, India from 7 to 12 November of 2016.

The COP welcomed the report and invited parties to consider applying regulatory measures referred to in the report.

According to information as much as available, WHO does not consider e-cigarette safe. WHO also suggests either to ban it or to control it like other tobacco products including cigarette and gul.

“e-cigarette is harmful and many countries of the world have already banned it and some have taken initiative to control it,” Dr Syed Mahfuzul Huq, National Professional Officer (NCD) of WHO Country Office in Dhaka told the daily sun on Tuesday.

Experts said the ENDS may be manufactured to look like conventional cigarettes, cigars, or pipes. Some resemble pens or USB flash drives. Larger devices, such as tank systems or mods, bear little or no resemblance to cigarettes.

Visiting various markets and spots in Dhaka including Gulshan DCC Market, New Market, Mirpur Section-10 circle, Dhanmondi, Baitul Mukrram market and Uttara, it was seen that some small stalls are selling the e-cigarettes of different brands and non-brands while they are also being sold online.

“We collect some non-brand e-cigarettes from Chawkbazar. These products are imported from China at a cost of around Tk1,500-Tk3,000,” said Miraz, owner of a stall of e-cigarette at Mirpur section 10.

Nazim, owner of another e-cigarette shop at the central plaza in Senpara Parbata of Mirpur, said they are marketing the e-cigarettes through facebook page.

Talking to daily sun, some e-cigarette sellers in the capital said youth and teenagers including school, college and university goers are their customers while some middle-aged people who want to quit smoking also buy the e-cigarettes as an alternative.

According to World Health Organisation, nicotine is highly addictive and it has a role in neuro-degeneration and there is evidence of brain development problems in children and fetuses that are exposed to nicotine.

According to a statement published on the website of Campaign for Tobacco-Free Kids, a 2016 Surgeon General’s report concluded that the use of nicotine in any form, including e-cigarettes, is unsafe, and it causes addiction and can harm the developing adolescent brain.

A growing number of studies have found that young people who use e-cigarettes are more likely to become smokers.

A January 2018 report by the National Academies of Sciences, Engineering and Medicine concluded that there is substantial evidence that e-cigarette use increases the risk of ever using combustible tobacco cigarettes among youth and young adults.

Though the government has significantly raised the price of tobacco products, including cigarette and bidi in a bid to restrain tobacco consumption in the proposed national budget for the new fiscal, nothing was mentioned about the e-cigarettes in the budget.

National Heart Foundation, Dhaka Ahsania Mission, Young Power in Social Action and Progga at discussion in Dhaka in March this year urged the government to prohibit the e-cigarettes.

They also proposed imposing a ban on the production, importation, and marketing of e-cigarettes and other Heated Tobacco Products.

“e-cigarettes are expanding fast in 26 countries including Bangladesh. Before it grows to an intolerable level, policy actions are needed to ban it,” Md Hasan Shahriar, project coordinator of PROGGA, told daily sun.

According to a survey of Global Adult Tobacco Survey (GATS) 2017, there are 0.2 percent people using electronic cigarette in the world while 6.5 percent heard about it.