Olympics is the next stop: Ruman

It is an historical achievement, says Chapol 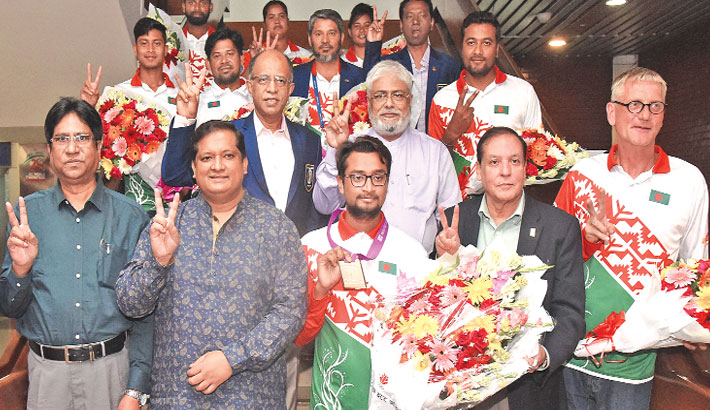 Bangladesh archer Ruman Shana expressed his determination to bring in an Olympic medal for the nation as he was felicitated for earning a bronze medal in recently concluded World Archery Championships. During the grand reception in the capital on Tuesday, he also thanked everyone concerned to continually support him throughout his campaign.

“Each player cherishes a dream to qualify for the Olympics. My dream finally has come true. I am really grateful to Allah who has fulfilled my dream,” told Sana.

“I have reached a huge milestone. My next goal is Olympics. I just hope for good practice facilities for Olympics. I don’t expect any other felicitations for the bronze success. Nevertheless I want to remain rooted to the ground. It is not that easy to win an Olympic medal. But If I can give my best, something good is in store for us. To achieve that milestone, I will have to work hard in the practice session,” said Shana.

The country’s famed archer felt that bronze medal which he won in the World Archery Championship is the biggest reward so far in his career, even eclipsing the first ever gold and silver medal he won earlier for Bangladesh at the World level.

“I cannot express my joy in words when I achieved the bronze medal. I would really want to thank my coach, federation members and supporters who have been supporting me and giving me inspiration to create history,” told Sana.

Roman in his bronze medal match produced an astonishing performance to take a 4-0 set points lead after winning the first two sets by 28-27 and 29-27 points. Nepsoli tried to stage a comeback as he tied the third set by 29-29 points.

With Ruman needing only one set point in remaining two sets, the lad from Khulna once again scored 29 against Mauro’s 27 to win the match by 7-1 set points.

“Well, I considered the match to be a fifty-fifty one. My goal was not to get nervous. But unfortunately I was overwhelmed during the first set. But recovered from the initial shock and regained my confidence and told myself that if they can do that that, I too (other Archers) can accomplish that,” told Ruman.

Sana, commenting about his coach Martin Fredric, said a coach like him is really needed for the long term for the development of country’s archery.

“It is a historic achievement. We are really happy that all of the efforts actually fruited,” told Chapol. During the reception ceremony archery team sponsor City Group handed over cash prize of Taka two lakhs to Ruman Sana while different federation officials gave floral reception to the victorious archer.

Bangladesh’s best archer Ruman, after earning the right to participate in Tokyo Olympics directly, ended his Hyundai World Archery Championships campaign on a high when he beat Mauro Nespoli of Italy for the coveted bronze medal.

Ruman, who had previously captured two gold medals on foreign soil in the First Asian Archery Grand Prix in 2014 and International Archery tournament in Kyrgyzstan in 2017.

He however eclipsed those performances with a bronze medal win as he had to compete against 200 archers from 92 nations including top archery nations like South Korea, Netherlands, USA, China, Chinese Taipei and India.