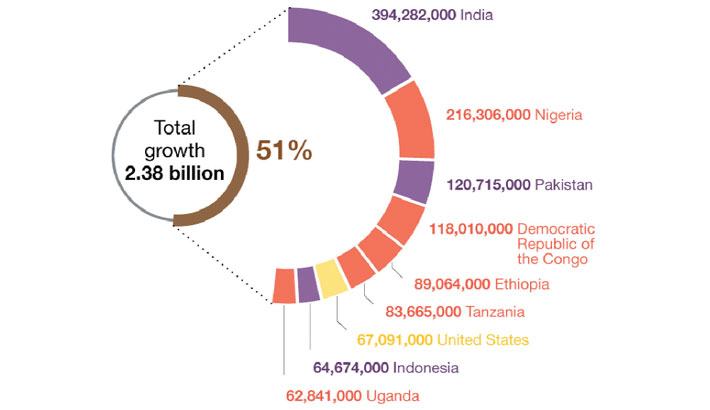 The world's population is expected to increase by 2 billion persons in the next 30 years, from 7.7 billion currently to 9.7 billion in 2050, according to a new United Nations report launched on Monday, reports UNB.

The World Population Prospects 2019: Highlights, which is published by the Population Division of the UN Department of Economic and Social Affairs, provides a comprehensive overview of global demographic patterns and prospects.

The study concluded that the world's population could reach its peak around the end of the current century, at a level of nearly 11 billion.

The report also confirmed that the world's population is growing older due to increasing life expectancy and falling fertility levels, and that the number of countries experiencing a reduction in population size is growing.

The resulting changes in the size, composition and distribution of the world's population have important consequences for achieving the Sustainable Development Goals (SDGs), the globally agreed targets for improving economic prosperity and social well-being while protecting the environment. The new population projections indicate that nine countries will make up more than half the projected growth of the global population between now and 2050: India, Nigeria, Pakistan, the Democratic Republic of the Congo, Ethiopia, the United Republic of Tanzania, Indonesia, Egypt and the United States of America (in descending order of the expected increase). Around 2027, India is projected to overtake China as the world's most populous country.

The population of sub-Saharan Africa is projected to double by 2050 (99% increase).

The global fertility rate, which fell from 3.2 births per woman in 1990 to 2.5 in 2019, is projected to decline further to 2.2 in 2050. A fertility level of 2.1 births per woman is needed to ensure  replacement of generations and avoid population decline over the long run in the absence of immigration.

Liu Zhenmin, United Nations Under-Secretary-General for Economic and Social Affairs, said the report offers a roadmap indicating where to target action and interventions.

"Many of the fastest growing populations are in the poorest countries, where population growth brings additional challenges in the effort to eradicate poverty, achieve greater equality, combat hunger and malnutrition and strengthen the coverage and quality of health and education systems to ensure that no one is left behind."

While considerable progress has been made in closing the longevity differential between countries, large gaps remain.