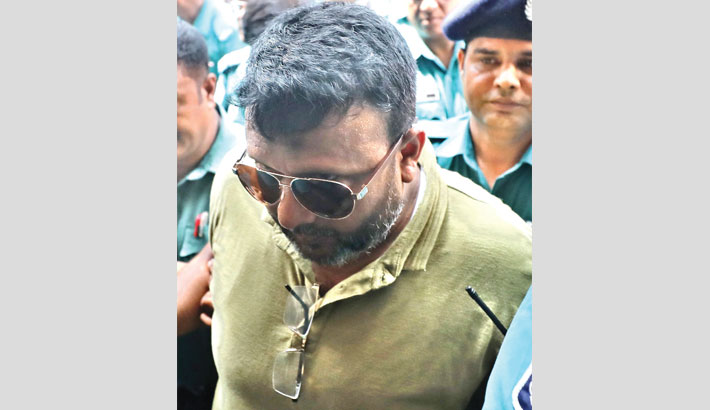 A Dhaka Court on Monday sent former Officer-in-Charge (OC) of Sonagazi Police Station Moazzem Hossain to jail after rejecting his bail petition in a case filed under Digital Security Act.

The officer was charged for illegally recording the statement of Feni Madrasa student Nusrat Jahan Rafi and spreading it online.

Judge Mohammad As-Shams Jaglul Hossain of   Cyber Tribunal passed the order after police produced him before the court in the case.

The court also fixed June 30 for hearing on charges farming against the police officer in the case.

Earlier on Sunday, Moazzem was arrested 20 days after a warrant was issued against him under Digital Security Act for illegally recording statement of Nusrat and spreading the video online.

The tribunal on May 27 issued arrest warrant against the cop a day after Police Bureau of Investigation (PBI) submitted its probe report over the incident.

PBI senior ASP Rima Sultana, also investigation officer of the case submitted the report before the Cyber Tribunal on May 26, stating that they have found the allegations against the police official true.

According to the allegations, the former Sonagazi OC summoned Nusrat as she filed a case against Sonagazi Islamia Senior Fazil Madrasa principal Siraj-Ud Daula for sexual harassment.

The police official in his room started quizzing her about the incident and was recording the whole incident in absence of any lawyer or female police. He was seen scolding her and asking Nusrat indecent questions. Moazzem, later, posted the video on different social media sites.

A group of masked youths, later found to be the accomplices of the disgraced principal, took Nusrat to the rooftop of the madrasa and set her on fire after tying her with her scarf.

Later, Moazzem was suspended a month later on charge of negligence of duty.