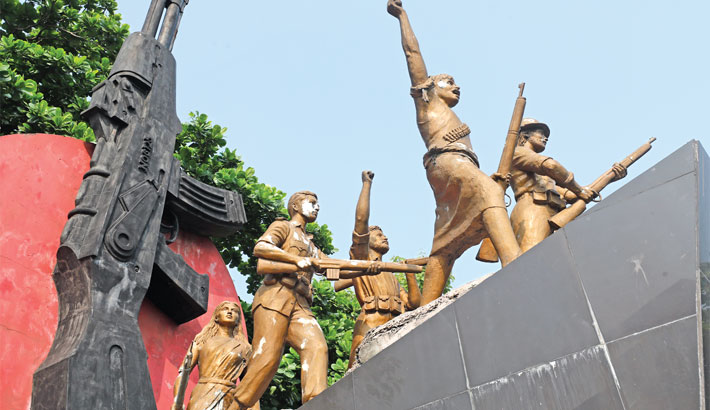 Prottasha, a sculpture on war heroes, on the Dhaka University campus is worn out without care. —Kamrul Islam Ratan

The magnificent sculpture – Prottasha – situated on Dhaka University campus is losing its grandeur for lack of renovation and proper care by the authorities concerned.

The statue near Fazlul Haque Muslim hall on Fulbaria road was erected to glorify the spirit of Liberation War, but unfortunately, it stands there in sorry state.

Constructed by renowned Bangladeshi sculptor Mrinal Haque on August 1, 2008, the structure shows five men and a woman -- all holding rifles in a move to fight the Pakistani occupation forces to liberate the country.

The sculpture not only heralds the contribution of men and women that fought together for the independence of the country, but also a concerted effort to take the country forward.

A careful observation shows that the golden colour of the monument is fading and tiles are being damaged as if nobody is there to look after.

Besides, some vested interests established rickshaw and van garage near the sculpture affecting its beauty and sanctity.

Dhaka South City Corporation (DSCC) is supposed to look after it and renovate, but to no avail.

Mohammad Shoaib, an undergraduate student of Dhaka University, told daily sun the fume emanating from vehicles as well as garbage and wastage from nearby clothing stores and restaurants are contributing to the damage of the monument.

Like Prottasha, some other sculptures at DU are reportedly losing grandeur for lack of attention too. Sources said a section of people hang clothes on Raju Bhashkorjo. Street children and floating people are doing so.

In addition, construction materials for metro rail are stashed near Raju Bhashkorjo and Doel Chattar on the Dhaka University campus. As a result, the two sculptures are bearing the brunt of them.