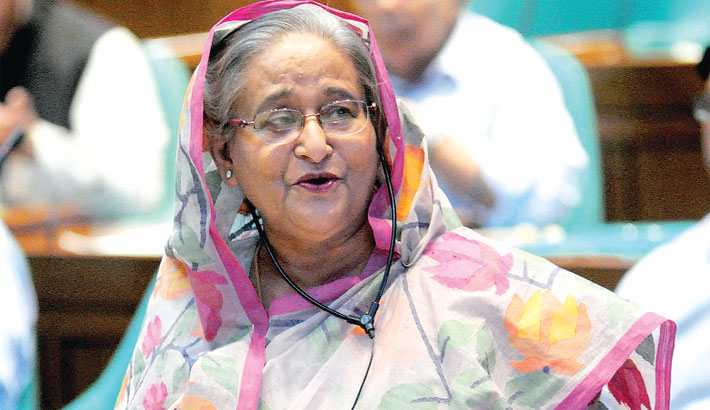 Prime Minister Sheikh Hasina on Monday censured her political rival Khaleda Zia for loting banks and said there was enough cash in the banks being used for the country’s development and not for looting.

Hinting at the Bangladesh Nationalist Party regime, the premier said those who looted the banks had left the country or was languishing in jail on corruption charges.

Opposition Bangladesh Nationalist Party (BNP) chairperson Khaleda Zia is serving a 17-year jail term on two corruption charges, while her elder son Tarique Rahman is in self-exile in London and has also been convicted in graft cases. By law, he is a fugitive on the run.

Pointing at the critics of the proposed budget for 2019-20 fiscal year, Sheikh Hasina questioned how Bangladesh could accomplish massive development in the past 10 years if the previous budgets were not good.

“Some people say we couldn’t implement the (previous) budgets. We can place budget, but if we had not been able to do so how have we been able to increase the budget size from Tk 61,000 to over Tk 5 lakh crore today?” she questioned back her critics.

“So, we target a little bit high amount during projection. There’s also necessity for fixing an ambitious revenue collection target to some extent,” she said.

Hasina said Bangladesh has success stories for making impossible things possible in the last one decade of journey towards progress and prosperity. “It was not possible to attain the achievements unless we had ambition,” she added.

About the supplementary budget, the Prime Minister said, “Our budget needs to be corrected, reviewed or fine-tuned to some extent because of the reality, which we do every year. It happens in the budgets of all countries.”

Taking the floor on behalf of housing and public works minister SM Rezaul Karim, the premier bitterly criticised the BNP founder Ziaur Rahman for usurping office by breaching the constitution and military law.

Referring to a recent scam on pillows at Rooppur Nuclear Power plant, the premier said the official in-charge of the project was removed immediately and was involved with BNP politics.

“The in-charge of the project was the vice- president of the Bangladesh University of Engineering and Technology student union and was affiliated with the Chhatra Dal (BNP’s student front). So, it is their character to involve in corruption. The founder of that party, who had a link with Bangabandhu’s killing usurped the office by breaching the constitution and military law,” she said in an apparent reference to General Ziaur Rahman whose widow Khaleda now heads the party.

Sheikh Hasina said without naming Zia that after usurping office, he declared that money would not be problem, rather he would make the politics difficult for the politicians.

Allegation of increasing corruption, the premier said graft marked a sharp rise during the BNP-Jamaat regime.

“Even they filed 12 corruption cases against me. But they were unable to prove any corruption against me,” she said.

“But they did not find any corruption against me or against any member of my family,” she said, adding that she did not assume office for committing corruption.

Over the demand of addressing corruption in a day, the premier raised counter question whether it was possible to address it in a day. The Anti-Corruption Commission has been working independently to combat corruption.

On allegation of looting of money from development projects of the capital city, Sheikh Hasina binned it and said Dhaka was one of oldest cities of the country.

“Despite such a drawback, we dared to develop the drainage system and other infrastructure to turn it a beautiful city,” she said.

Listing her government’s development activities to impress and convince the lawmakers, the premier said, “That’s why additional allocation is not illogical and I request you to withdraw your objections.”