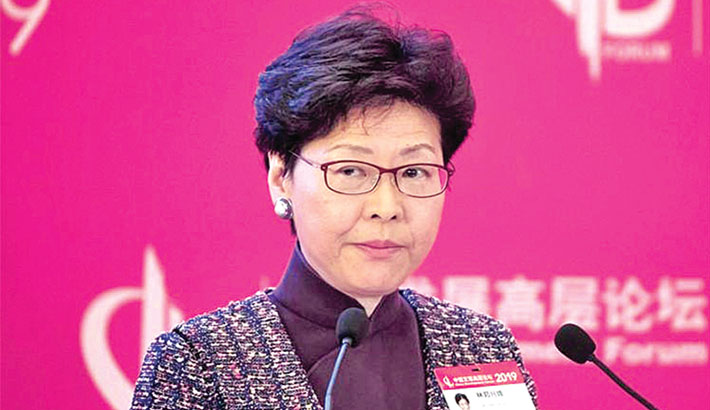 HONG KONG: Demonstrators in Hong Kong gathered Monday outside the office of the city’s leader, demanding that she step down for the crisis over a highly unpopular extradition bill that has tested the durability of China’s promises to respect the former British colony’s quasi-autonomy, reports AP.

The mostly young protesters blocked a street near the city’s waterfront as they stood outside the office of Chief Executive Carrie Lam chanting calls for her to cancel the proposed legislation. As night fell, protest leaders debated their next steps. Some wanted to set a deadline for a meeting with Lam. Others decided to head home. Nearly 2 million Hong Kong residents, young and old, joined a march on Sunday that lasted late into the night to express their frustrations with Lam and the extradition bill, backed by Beijing. Many stayed on afterward.

Protesters blocked some downtown roads well into Monday morning, but gradually yielded to police requests to reopen roads, moving to areas near the city’s government headquarters. The protest revived after Joshua Wong, a prominent activist leader, rallied the crowd after his release from prison later Monday.

The activists have rejected apologies from Lam for her handling of the legislation, which would allow suspects to be sent to mainland China for trial. She announced that work on the bill would be suspended after large protests last week, but the legislation has touched a nerve not easily soothed in a city anxious over the increasingly authoritarian Communist rule of Chinese President Xi Jinping.

“We are very angry that Carrie Lam has not responded to the demands of all the protesters, but now is the time to talk about strategy, and talk about strategy is about how to make the whole struggle into a long-term struggle and not a day struggle, so if Carrie Lam does not respond to the demands by the protesters, people will come back and the struggle will continue,” Lee Cheuk-yan, a former legislator and activist, said Monday. The uproar over the extradition bill highlights worries that the former British colony is losing the special autonomous status China promised it when it took control in 1997.

On June 9, a week earlier, as many as 1 million people demonstrated to express their concern over Hong Kong’s relations with mainland China. The scenes are similar to those in 2014, when protesters camped for weeks in the streets to protest rules that prevented the direct election of the city’s chief executive.

Wong, who was imprisoned for his role in the 2014 demonstrations and sit-ins, dubbed the “Umbrella Movement,” was released from prison on Monday after serving half of a two-month sentence on a contempt charge.