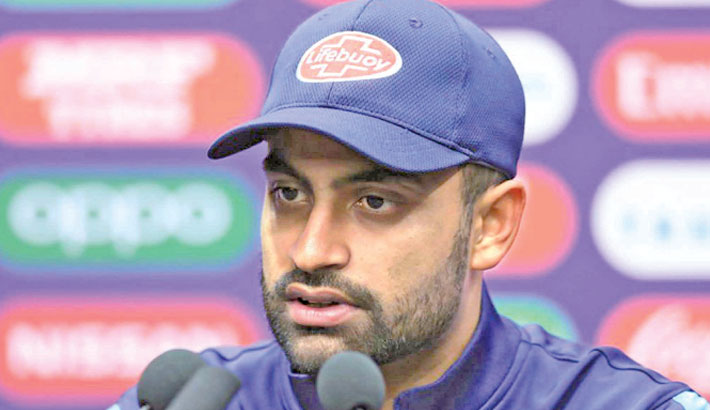 Mortaza had been criticized by the fans in social media for his performance in the ongoing global event where he picked only one wicket during the 21 overs he’s bowled so far in the ICC World Cup 2019, conceding 149 runs.

Set to retire after the ongoing World Cup, Mortaza has had to face some recent heat because of his bowling form by some former international cricketers as well in the commentary box as many believed he is well past his prime. Moreover, he is unable to provide the charismatic captaincy that he used to deliver in the past.

“It is important to note whom you are criticising,” Tamim told reporters when his attention was drawn regarding the form of their inspirational captain on Tuesday.

“Before criticizing him, People should think what he has done for the (development) of cricket during the last 15-16 years for at least two minutes,” he said.

“If we call him unfit then he was unfit for the last 10 years because his legs were not totally fine during then but at that time we took it sportingly even emotionally but now we are taking it differently when things are going wrong,” he said.

“We are talking about someone who had literally brought us here. He deserves much more respect than what he is receiving,” he said.

“Many players go through ups and down in such a mega event. Even the champion team doesn’t have eleven performing players in their squad. His leadership and presence in the team is very important for other players,” he said.

Tamim said that they are well aware that West Indians will come up with lots of short balls. A tactic that they have followed so far in the tournament but Tamim felt that they must make sure not to lose the opportunity of punishing the bad balls that had also been provided by Windies on regular intervals.

“We normally try to simulate in the nets what our opponents are likely to do. They usually target us with the short ball but they do the same against all sides in the first ten to 15 overs. They also give run-scoring opportunities. We have to prepare for both, that’s why we are working hard in practice,” told Tamim.

“We want to make sure it is not a surprise for us. We have an idea about their batsmen and bowlers, but I have noticed their different planning in the ICC World Cup. It is not the same thing that we faced in Ireland or West Indies,” he said.

“They are focusing heavily on the short ball, but if you handle it well enough, there’ll be opportunities to score runs. They have been bowling this way against all sides,” he said adding he still believes that they are the favourites on June 17 at Taunton.

“Of course (we are favourites), why not? We have won more than them in the recent past. In Ireland, we won all three matches against them. It does not matter to me who are favourites and who are not. Cricket is such a game that whoever brings their A game have a chance to triumph on that particular day. That is the case for any team in this World Cup,” he said.

“It is not important who has that tag, it’s about whoever plays well. If you see West Indies’ first two matches, they looked a different side than what they were six months back. Then again, if you look at how we played our first two matches, we also looked a different side. We were challenging the top teams in these conditions. One went in our favour, one didn’t. It will be a good match I think; we just need to see who brings their A game on the given day,” he said.

The only thing that looked to be disturbing Tamim at the moment is the way he is getting out after being set as he feels it is not something he is used to.

“If I can manage to stick around for ten overs, I score big. In the last three matches I played according to the situation in the first five to seven overs but somehow when everything was under control literally I gave away my wickets at least on two occasions and that was disappointing because usually it does not happen,” he said.

“I am hopeful if I can get a good start I will be able to do well. We have to play well no matter what kind of a wicket we get. I have never played in Taunton before though I have heard it is a heaven for the batsmen but curators are preparing this pitch differently now. Bowlers also got some help from the wicket in Australia-Pakistans match,” he said.

“But I will be looking forward for a good innings in the next match,” he concluded.