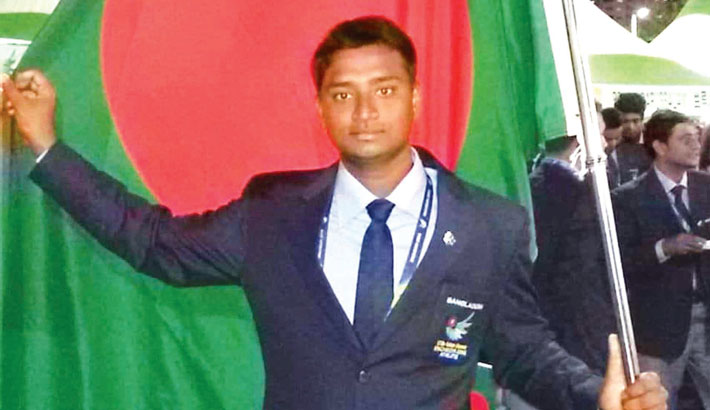 Bangladeshi archer Ruman Shana poses for a photograph after winning the first Bronze medal for Bangladesh at Hyundai World Archery Championship-2019 at s-Hertogenbosch in the Netherlands on Sunday.

Ruman defeated the Italian by 7-1 set to win the first Bronze medal for his country.

Earlier, Bangladeshi archer Ruman Shana made history by confirming the ticket to the Tokyo 2020 Olympic Games in archery, despite suffering defeat to his Malaysian rival Khairul Anuar Mohamad by 3-7 set points at the semi-final of Hyundai World Archery Championship 2019 at s-Hertogenbosch in the Netherlands on Thursday.

Ruman is the second Bangladeshi athlete to qualify the Olympics directly after ace golfer Siddikur Rahman. Siddikur earned the Olympic quota for the Rio Olympics in 2016.

Despite the loss in the semi-final match, Shana’s result was enough to qualify for the Tokyo Olympics. Playing at the semi-finals is also the best ever performance by any Bangladeshi at the world’s top archery competition.

“I don’t know how to explain, I’m really so happy. Proud of me; so happy. My target was quarterfinal but my shooting is very well today (Thursday),” said Ruman. “In my dream, I’m beating a Korean guy and I did it. So I’m so happy.”