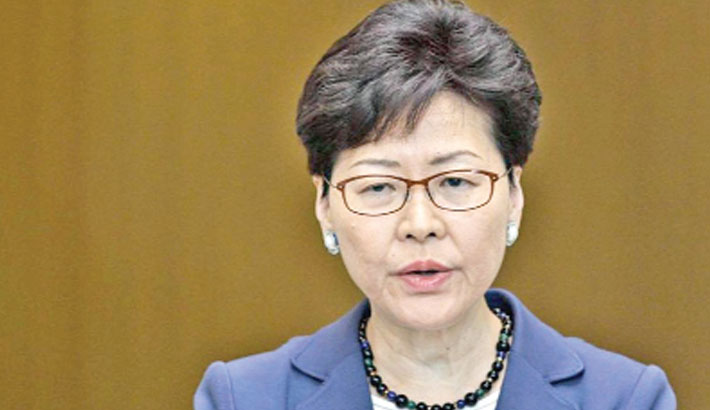 HONG KONG: Hundreds of thousands of protesters choked Hong Kong’s streets for a second straight Sunday in a defiant rebuke of a reviled extradition law, piling pressure on the city’s embattled pro-Beijing leader who apologised for causing “conflict” but refused to step down, reports AFP.

The show of force saw huge crowds marching for hours in tropical heat, calling for the resignation of chief executive Carrie Lam, who was forced to suspend the bill as public anger mounted.

Throngs of black-clad protesters snaked their way for miles through the streets to the city’s parliament—a repeat of a record-breaking demonstration last Sunday that organisers said more than a million people attended.

As night fell the huge crowds had once more taken over multiple major thoroughfares, including outside the legislature, with the police seemingly ceding the streets to the jubilant masses. Critics fear the Beijing-backed law will entangle people in China’s notoriously opaque and politicised courts and damage the city’s reputation as a safe business hub. Lam’s office put out a statement late Sunday admitting that shortcomings in how her administration handled the law had “led to a lot of conflict and disputes” and “disappointed and distressed many citizens”.

“The chief executive apologises to the citizens and promises to accept criticism with the most sincere and humble attitude,” it said.

It came a day after she announced she would postpone the law indefinitely.

Still, Sunday’s statement fell well short of demands that she resign, shelve the bill permanently and apologise for police using tear gas and rubber bullets earlier in the week.

The international finance hub was rocked Wednesday by the worst political violence in decades as protesters were dispersed by baton-wielding riot police.

Many accused the police of using excessive force and anger was further fanned by authorities calling the largely young protesters “rioters”.

Nearly 80 people were injured in the unrest—including 22 police officers—with both sides showing a willingness to escalate action and reaction to levels unseen in the usually stable business hub.