Budget implementation a challenge for govt

JP says in its budget reaction 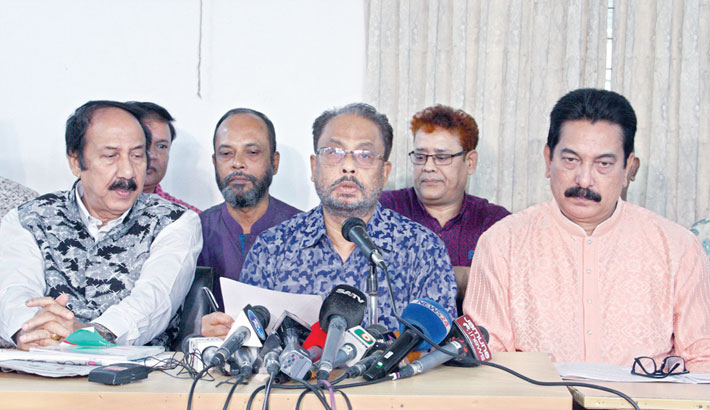 Acting Chairman of Jatiya Party GM Quader speaks at a press conference on the proposed budget at the party’s Banani office in the city on Saturday. – SUN PHOTO

Jatiya Party acting chairman GM Quader has said the implementation of the proposed national budget for the fiscal year 2019-20 would be a challenge for the government.

“Jatiya Party believes that budget is made for mass people. The proposed budget of Tk 5,23,190 crore for fiscal year 2019-20 is the biggest budget ever. Its size is much bigger. A large amount of money will have to be earned from revenue sector. On the other hand, a huge amount of money also will have to be spent in fixed sector. These two issues are big challenge for government,” he said.

The acting chairman of the party made the remarks while giving the party’s formal reaction about the proposed budget for fiscal year 2019-20, at the party chairman HM Ershad’s Banani office in the capital on Saturday.

GM Quader said in the proposed budget, the government will face difficulty of taking loan from the bank to meet deficit. The government should carry out proper assessment before borrowing money outside bank and remain cautious about its effect.

Mentioning that allocation of Tk 100 crore in the proposed budget to create business and entrepreneurs among the youths, he called the government to increase the allocation to Tk 1,000 and to make specific policy for giving the allocation and use it.

The Jatiya Party acting chief welcomed the government’s to keep proposal of reducing prices of different products including agri-mechineries, cancer medicine and breads and biscuits and proposed the government not to increase prices of sugar, edible oil, powder milk and cookeries.

Terming the farmers as heart of the country, he said the government should keep incentive for buying paddy to save the farmers in the budget.

GM Quader also demanded to withdraw imposed duty on mobile phone calling and to reconsider the proposal of increasing tax on items of ICT sector.