Survival of the fittest

Sumi’s struggle for life an inspiration to entire womenfolk 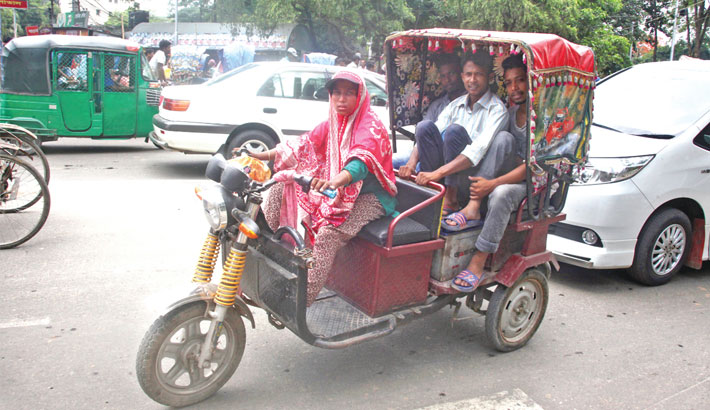 Life is not a bed of roses. But human being has proved its ability to overcome all impediments. God made the world and men made the city. The earth has become an attractive liveable place due to scientific and commercial advancement. Contribution of human being to transformation of the world from a grotesque character to a fairy queen is evident in evolution of civilization.

“Survival of the fittest” is a phrase that originated from Darwinian evolutionary theory as a way of describing the mechanism of natural selection.  It is a famous phrase of Herbert Spencer which describes the idea that, in nature, there is competition to survive and reproduce.

Sumi Begum, hailing from Boraigram of Madaripur, has become a perfect symbol of human struggle for existence and survival.

Unlike many other women, she chose to drive motorized rickshaw for earning a livelihood.

She lives in a tiny shanty in Kamrangirchar in Dhaka with two daughters and mentally imbalanced husband.

Talking to this correspondent, Sumi said her husband became mentally sick 10 years ago. It was the time when she started her struggle.

“I borrowed money from some people and tried to survive. Within a few days, I realized that borrowing money was not a way out of the crisis.”

With the help of others, she bought a motorized rickshaw for carrying passengers. She makes movement in Azimpur, New Market, Dhaka University, Jatiya Press Club and High Court areas.

Inclement weather cannot prevent her vehicle from moving. She does not give tuppence for blazing sun or cloudy sky.

She is always seen on the street.

On May 16, she was spotted in front of the Supreme Court. She along with passengers was held up in traffic jam. Although the passengers were under hood, she was exposed to the open sky.

Wearing traditional dress — salwar and kameez — she was on the driving seat. She was wearing a soft churi (bangle), but her copper hand was the testament to her life of hardship and toil. She wore a cap which was not enough to protect her from the sun and the rain.

Talking to the Daily Sun, advocate Nazrul Islam, a lawyer of the Supreme Court, said, “Sumi is an inspiration to the entire womenfolk. She has contributed to country’s stride towards gender equality.”