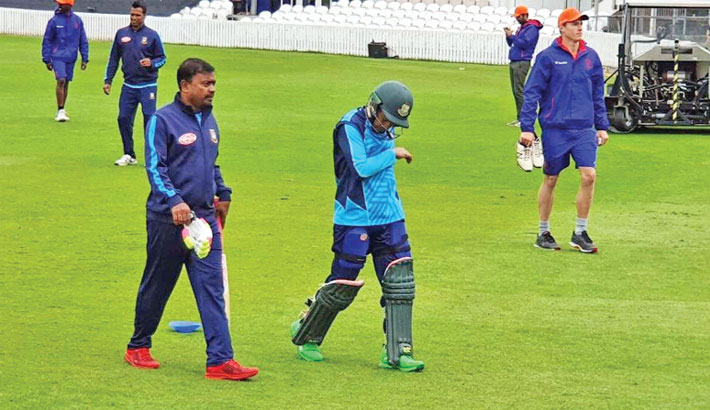 Bangladesh wicket-keeper batsman Mushfiqur Rahim walks off the field after a blow to his hand during a net practice session at The Cooper Associates County Ground in Taunton on Saturday.

Bangladesh received another injury scare as Mushfiqur Rahim left the nets midway through his batting session after he was struck on the wrist by Mustafizur Rahman in Taunton on Saturday.

It can a be a major blow for Bangladesh if the wicket-keeper batsman doesn’t recover in time as they are expected to take on West Indies at the same venue on June 17.

Mushfiqur, who was batting in the nets, was hurt on his wrist by a delivery bowled by Mustafizur and left the nets immediately along with team physio Thian Chandramohan.

Mushfiqur did not return back to the nets afterwards as he was busy icing the injured area in the dressing room.

“The injury does not look serious but he will be under observation for twelve hours and later we will decide on the next course of action,” said a BCB spokesperson.

“We can put out a statement on the extent of the injury only after the icing is completed because it will help us assess his condition,” he said.

Bangladesh opener Tamim Iqbal also had an injury scare during the earlier phase of the tournament when he was struck by a delivery in the nets at Oval ahead of their opening game against South Africa, though he managed to make himself available for all the matches in the tournament so far.

Bangladesh would like it to pan out the same way with Mushfiqur as well considering he is the mainstay in their middle-order as injury turns out to be a major concern for them in the ongoing ICC World Cup.

He was instantly became unconscious and laid there for some time as Bangladesh physio Thian came running back to the field to treat the net bowler who came from an academy nearby.

Blood spilled out of his wound as medical team looked after the young pacer and treated him back to consciousness. Eventually he was comfortable enough to walk on his own and left the field to rest but he too was put under observation considering the sensitivity of the spot where he was hit.