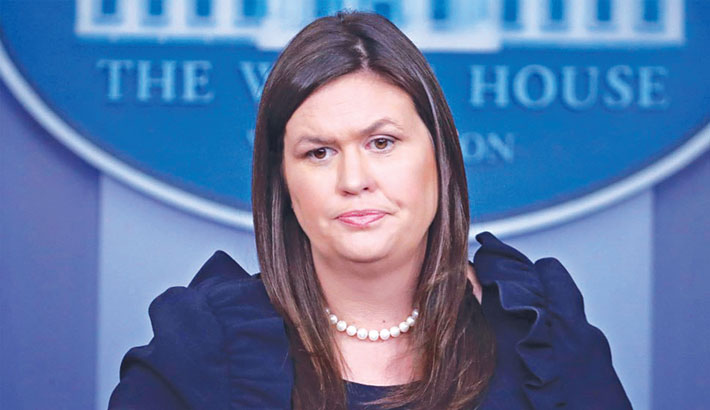 WASHINGTON: President Donald Trump on Thursday announced the surprise departure of his spokeswoman Sarah Sanders, after a combative tenure that saw her all-but kill off traditional White House briefings to journalists, reports AFP.

Sanders has been one of Trump’s most loyal foot soldiers, almost constantly at his side during his tumultuous two and a half years at the White House and during the campaign before.

Trump announced her exit in a tweet and did not name a replacement.

“After 3 ½ years, our wonderful Sarah Huckabee Sanders will be leaving the White House at the end of the month and going home to the Great State of Arkansas,” Trump said, adding that he hoped she would run for governor of her state.

Sharp, sometimes acid-tongued, Sanders has not been prone to the almost comic slip-ups that embarrassed predecessors in the job, such as short-lived Trump spokesman Anthony Scaramucci. But she has earned a reputation for bruising clashes with journalists whom she finds over-critical—often echoing her boss’s attacks on unfavorable coverage as “Fake News.”

At a White House event Thursday on reintegration into society for ex-prisoners, Trump interrupted proceedings to summon the “warrior” Sanders from the audience and lavish praise on her record.

In fact, Sanders, 36, has a sometimes bitter relationship with the White House press corps and is seen as responsible for the demise of the formal daily briefing—practically an institution under previous presidents.