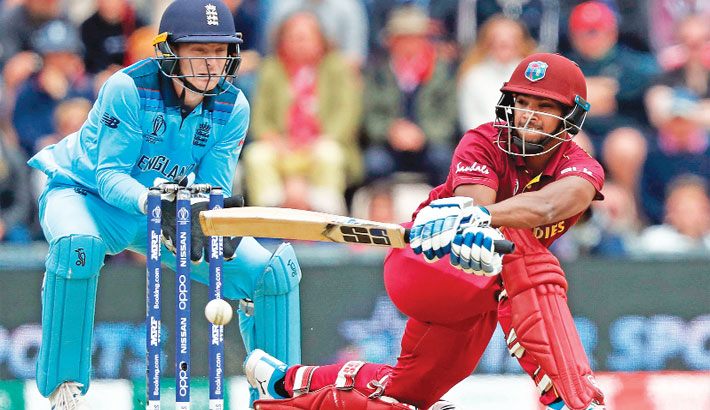 England opener Joe Root scored his second century of the ongoing ICC Cricket World Cup 2019 as England won against West Indies by 8 wickets in their group-stage clash at The Rose Bowl in Southampton on Friday.

Root reached three figures off 93 balls with 11 fours and is now the tournament’s top-scorer — with a total of 279 runs in four innings.

Jonny Bairstow, who made 45 runs off 46 balls hitting seven fours.

Shannon Gabriel was the most successful bowler for West Indies picking up 2 wickets for 49 runs in his 7 overs.

Shimron Hetmyer (39) and Nicolas Pooran (63) stitched up a solid 89-run partnership but other West Indies batters failed to capitalize. Pooran managed the highest 63 runs off 78 balls including three fours and a six for the Windies.

Opener Chris Gayle, dropped early by Wood in the deep, briefly threatened, hitting Woakes for 10 in two balls, but was caught by Jonny Bairstow on the square-leg boundary for 36 off the bowling of Liam Plunkett.

Gayle shared a 50-run second-wicket stand with Shai Hope (11) and surpassed Viv Richards’ record of 1,619 career runs in ODIs against England when he stroked Woakes for a boundary. He drove the next ball down the ground for six just for good measure.

But he was out for 36 from 41 balls — setting the bilateral run record at 1,632 — when he pulled Liam Plunkett into the deep and Jonny Bairstow took a running catch.

Part-timer Root picked up a pair of return catches to remove Hetmyer and Jason Holder (9) and return 2-27.

Tournament favourites England have won three of their four group matches as they chase a place in the semi-finals.

England’s Joe Root was adjudged player of the match for his brilliant century.