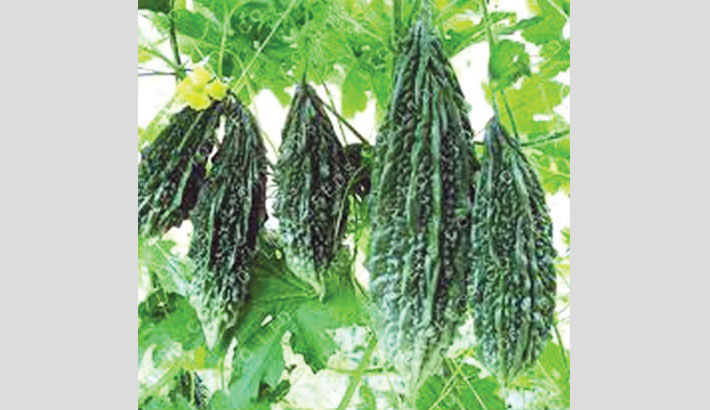 MANIKGANJ: Cultivation of bitter gourd on a large scale in different upazilas of the district and fair price of the crop has started changing the fate of several thousand farmers, reports BSS.

Most of the bitter gourd farmers are very happy as they getting a double price of their products during the current season, local people said.

Farmers of Ghior upazila of the district cultivated bitter gourd on 250 hectares of land this season and got a good production.

Local farmers are selling their bitter gourd to retailers at a high price.

Abul Hasan, one of the bitter gourd cultivators of Bastia village of Ghior upazila, said he was selling bitter gourd at Taka 40-45 per kg against Taka 15-20 in the last year.

Ghior Upazila Office of Department of Agricultural Extension said the crop was cultivated in the area under the Export Standard Vegetable Cultivation Programme during the current season.

Farmer Shamsul Huq said he cultivated bitter gourd on seven bighas of land and has already earned a profit of Taka 2.50 lakh.

Altaf Hossain of Angurpara village of the same upazila said he cultivated bitter gourd on four bighas of land and received about Taka two lakh by selling his produces.

Ashrafuzzaman, Ghior upazila agriculture officer, said the field level agriculture workers have been providing guidance to the farmers to get maximum production.

The farmers of Harirampur and Shibalaya upazilas of the district are cultivating bitter gourd and earning a good profit.

Most of the farmers cultivate onion and bitter gourd on the same land at the same time. After harvesting the onion they began to start nursing the bitter gourd.