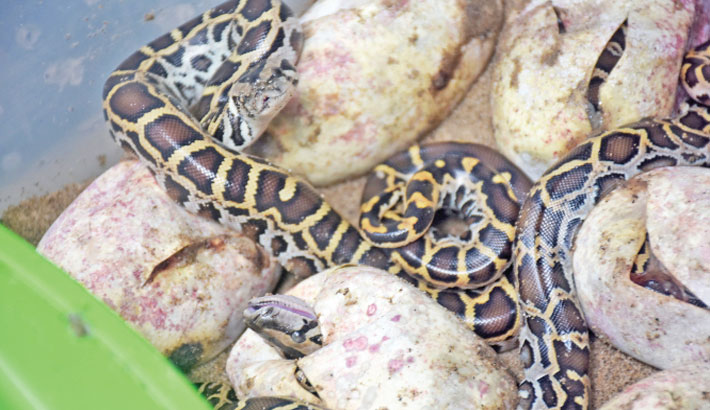 Baby pythons hatch out at an incubator at Chattogram Zoo on Thursday. A total of 26 pythons were born artificially at the zoo for the first time in the country. - sun Photo

CHATTOGRAM: In the wild one would be scared to see a python, small or big, but in a zoo it is a delight for the young and old. The Chottogram Zoo made a history when for the first time 26 pythons were born in their incubators.

Officials of the zoo, located in the beautiful Foy’s Lake area, announced Thursday the birth of the 26 pythons saying it was the first such case for Bangladesh.

Physician and Deputy Curator of the zoo Dr Shahadat Hossain Suvo claimed that they could hatch eggs of a python owned by the zoo artificially for the first time in the country.

“A python laid some 35 eggs at the zoo around two months back,” he said, adding that the eggs were preserved properly in incubators to keep them safe from adverse temperature outside.

“We could succeed finally when 26 of the eggs slowly cracked to show python babies peeping on Thursday morning, some 60 days after preserving them at different temperatures inside the incubators,” said Suvo.

Skins of the pythons will take new shape after 15 days of their birth when old ones would fall off, he said.

The pythons will be released at natural habitat after around three months, added Suvo.

Mentionable, the zoo, which was developed on a four-acre of land in 1989, was expanded only on one more acre in its 30 years of journey.

There are now some 300 animals of 51 species for display at the zoo.

Over 3,000 animal-lovers visit the Zoo everyday to help earn a handsome amount of money from ticket, said sources.