Was rain-struck England the best candidate to host WC? 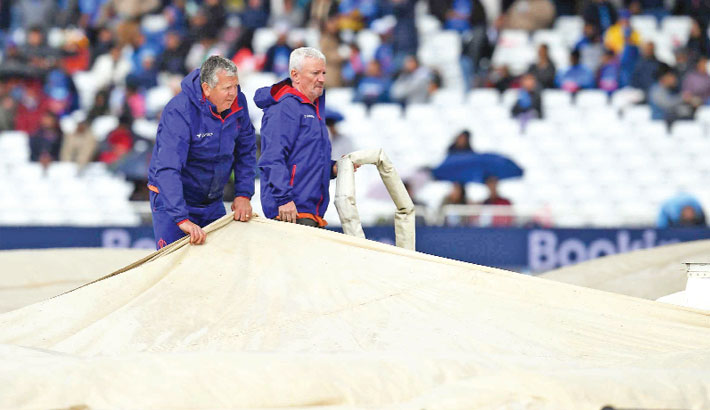 Groundstaff members attend to the covers over the playing surface ahead of the 2019 Cricket World Cup group stage match between India and New Zealand at Trent Bridge in Nottingham, England on Thursday. — AFP Photo

The English summer has always had its issues with the rain, and the World Cup is following a similar pattern. Since rain has been playing spoil sport in ICC Cricket World Cup 2019, teams are engaged in calculating risk factors of being washed out. Till date, three matches of ICC World Cup 2019 were called off due to incessant rain which is, however, a record; in no other World Cup previously, so many were abandoned due to rain.

This brings up the question, what if semifinals and final are washed out as well?

International Cricket Council (ICC) have reserved a day each for both the semifinals and the final. However, if rain prevents the match from reaching the finish line on both the normal day and the reserve day in the semifinal, the team which finished higher on the league table would qualify for the final.

If both the days of the final are washed out, then the two finalists will share the World Cup trophy. If any of the final and semifinals end in a tie, there will be a super over to decide the winner. No reserve days have been allocated for the league matches and in case of tied matches, both the teams will get a point each.

Teams who lost probable vital points might cost them the semi-final place at the end.

As the greater part of the tournament is yet to be staged, weather forecasts continue threatening the calculation.

With rain being a big threat, there is a huge possibility that more than one team might end up with same points at the end of the league stage. In such a scenario, the team which will progress ahead will be decided on their number of wins, net run-rate, head-to-head result and pre-tournament seeding.