The enchanting sound of handloom weaving machines in Baburhat Market located at Shekherchar in Narsingdi is getting quieter as most of the handloom factories of this region are in a dire state. A lot of weaving machines have been lying inactive for decades and this number is rising gradually. Therefore it is the weavers who are actually facing the deadly consequence of this situation by losing their age-old profession. Besides, we have been losing a long-established tradition which is entwined with our life and culture. Probably we have never thought that what will happen to our handloom artisans when they will lose their source of income? High level of skill is needed to produce handloom products. The traditional handloom weaving industry in our country is alive due to the contributions of generations of skilled weavers. But now these weavers are giving up weaving. If the current trend continues, our handloom industry will not survive. And in that case we will no longer have any Tangail cotton sari, Rajshahi silk, Dhakai Jamdani and Benarasi sari, which are woven by hand and considered as a hallmark. Moreover, the texture and quintessence of ‘the hand’ will be lost forever.

According to statistics provided by Bangladesh Handloom Board, near about six types of loom are available in our country. They are Pit loom, Chittaranjan loom, Komor loom, Frame loom, Benarasi and Jamdani and Power loom. Weavers of different regions work with diverse sorts of handloom. It indicates that although handloom products are made all over the country, people of each area have their distinctive fabrics and products. For example, Narayanganj is famous for Jamdani saris. Pabna, Rangpur and Dhaka are reputed for traditional Benerasi saris and Ruhitpuri lungis, Chapai Nawabganj and Rajshahi for Silk saris and punjabis, Tangail is famous for cotton saris, Cumilla for its Khadi saris, punjabis and shawls, and Sylhet and Moulvi Bazar for Monipuri saris, lungis and shawls. Together our weavers can meet merely 40 per cent of the annual demand of the common people’s requirements of approximately 168 crore metres of fabrics and produce sari, punjabi, lungi, baby wear, towel (gamcha), bed sheet, tapestry, upholstery, place mat, rug or blanket, satranji, tribal textiles, sofa’s cushion cover, table cloth, napkin, duster, kitchen towel, and other clothes. 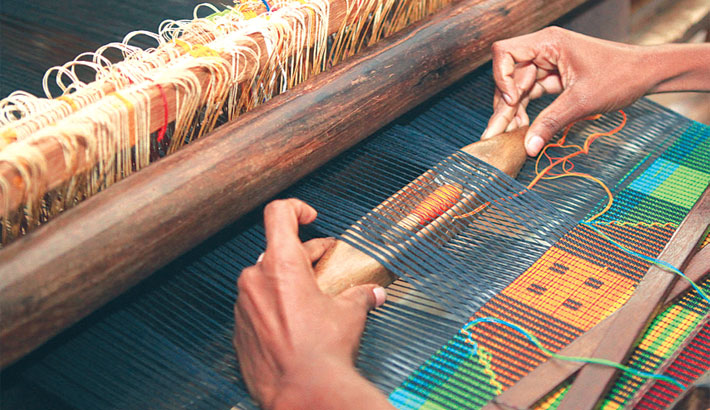 Unfortunately the handloom industry is stricken with some long-term problems which are contributing greatly to doom the industry. In most cases our weavers do not get quality raw materials in the right time in the right price. It is mentionable that the economic efficiency of the handloom enterprises is fundamentally dependent upon the pricing of yarn, which is essential for weaving different handloom products. Thus when the price of the yarn rises, it becomes one of the most pressing and perpetual problems for the weavers. And that is what is exactly happening now in Bangladesh. According to a report published in April 2018, 30s carded cotton is sold at $3.44 per kilo in the country, causing a 2.38% increase within one week and an 8.86% surge from December 17, 2017, to January 21, 2018. Its aftermath is quite clear. For example, once weavers needed yarn worth Tk 400 to 600 for per Jamdani sari which has increased to Tk 600 to 800, and for every elegant Jamdani sari they required yarn worth Tk 1200 to 1600, which has augmented to Tk 1500 to 2000. Consequently prices of almost all yarn products have increased in Bangladesh by 7 to 12 cents in a week and by over 20 cents on an average in five weeks. Albeit yarn market price gets unstable, the price of handloom products remains the same. As a result, handloom weavers are bound to count the additional cost from their pocket. Besides, when increased costs of labor, electricity and transport are added to the manufacturing cost, local weavers cannot raise the product price and lose their share of profit.

Another major problem of the industry is that the artisans do not get adequate wages for their labor. A good piece of Jamdani sari requires the efforts of one to two months, but at the completion of their work the salary the artisans receive never rewards their hard work and skill. Salim Mia, 45, an owner of a small handloom unit in Sirajganj, told that a senior artisan (taanti) earns only Tk 3,500 to Tk 4,000 per month while an average skilled artisan gets around Tk 2,000 per month! Therefore many weavers do not want their children to pursue this profession. Compared to the handloom industry, garment factories offer more salaries to their employees which also discourages them to be weavers. Jamal Hossain, 34, is an artisan living in Mirpur, Dhaka. After working for 18 years as a Benarasi weaver he can earn only Tk 1000 for weaving a median Benarasi sari in three days. He needs a week to produce an elegant Benarasi sari which helps him to earn Tk 2500. The cost of producing an ordinary Benarasi sari is more than Tk 3,000 but weavers need to sell them to the shop owners at Tk 3,500, which apparently limits their opportunity to make profit. 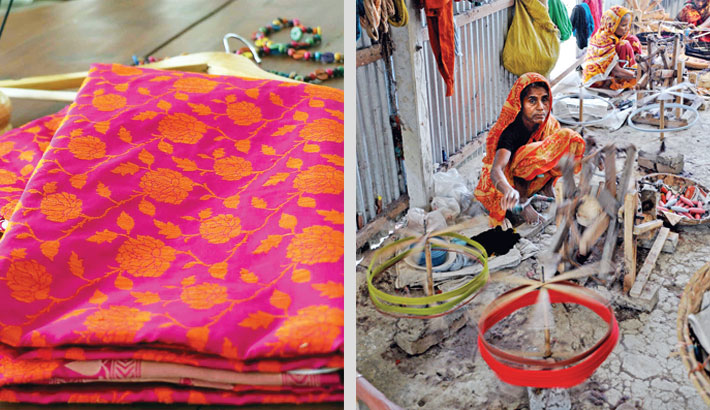 Due to poor salary, most of the artisans cannot lead a stable life. Abdul Rahim (38) has been working as a handloom weaver for the last 20 years in different private handloom factories at Narsingdi’s Baburhaat. He said, “I can weave eight to ten yard of clothes in ten hours. I get Tk 20 for every yard of fabric I weave. This amount is never enough for me. I need to struggle to meet the financial requirements of my family. I live in a nearby tin-shed home with my wife and two children. My monthly expenditure often crosses Tk 8000. Consequently I need to compromise the educational expense of my children!”

This situation has been reducing the number of weavers in the country. In 1990, when the first census was conducted, the total number of handloom in Bangladesh was 212,421. The last census was carried out in 2003 which revealed that nearly two lakh handlooms were shut down in 13 years. It is mentionable that once we had a capacity of five lakhs of handlooms. According to a preliminary report of Handloom Census 2018 conducted by Bangladesh Bureau of Statistics (BBS), the industry has witnessed a drastic fall in the recent days and the number of handlooms has declined by about 45.39 per cent to 1.16 lakh in 15 years. The total number of workers also slumped to 301,757 (133,444 male and 168,313 female workers) from 888,115 workers in 2003. The number of handloom workers was 10,27,407 in 1990.

Economic sustainability of loom industry and artisans’ interest in their profession can only be ensured through promoting handloom products in the local and international markets. Local weavers have, unsurprisingly, been exposed to competition and with the massive influx of Indian weaved saris and salwar-kameezes into the country’s market, the demand for local products has fallen down drastically. Small handloom entrepreneurs have lack of sufficient resources and they often do not have direct access to markets. As a result they have to depend on the middlemen and because of this dependency they are deprived of their proper share of profits.

Well, though handloom sector is the biggest handicraft industry of the country, it didn’t get necessary attention from our policymakers. Thus despite its huge prospects handloom sector of Bangladesh has been struggling. Only a few examples are available where the government patronized our handloom weavers. In the mid-nineties, the government provided a loan of Tk 18,000 to every weaver. And a similar attempt was taken again in 2001 albeit most of the weavers turned bankrupt because of the high rate of interests and raw materials. But there was hardly any feasibility study before providing these loans. Therefore the government support didn’t work for the betterment of the industry. Recently the government has taken a plan to establish ‘loom zones’ at Shibchar in Madaripur and Zajira in Shariatpur on 120 acres of land. The government has taken a project to provide running capital, resume production in closed handloom factories and modernize handlooms for improving the socio-economic condition of the people involved, which is scheduled to be implemented by June 2020. Besides, ten training and two market promotion centres will be constructed at Basic Centres of Bangladesh Handloom Board. If these projects are implemented properly, our handloom industry will be benefited but the unfortunate fact is that the government took such projects in the past but couldn’t realize those.

Shrinking income, lack of capital, gradual mechanization, weavers’ shift of profession and problems regarding the marketing of handloom products are the main reasons behind the tragic downfall of our handloom sector. However proper planning and its perfect execution from the part of government could take this industry to a new height and open another door for the country’s economy. They could assess the prospects of this industry, conduct research and allocate fund for it. Still we have time. If all the stakeholders work together, our weavers can think of producing quality clothes and dresses for the international markets after meeting the requirements of the people of Bangladesh. Only then they can save this industry from its doom.