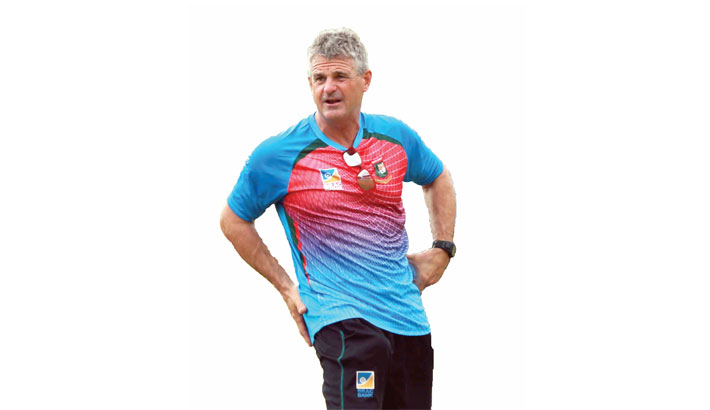 Bangladesh head coach Steve Rhodes said that he is confident that Tigers will conquer the pace bowling threat of West Indies when the two sides meet each other at Taunton on June 17.

According to Rhodes West Indian pacers are very well known to his charges and they are quite aware of their strength and weakness considering they have encountered them quite often in the recent past.

“We are well aware of what they got and we know what’s coming. We got plans to try and deal with that,” he said.

Bangladesh recently won the tri-series in Ireland featuring West Indies and Ireland and in that series Bangladeshi batsmen tackled the pace of Sheldon Cottrel, Kemar Roach and Jason Holder in an extraordinary manner.

Tigers clinched their maiden multi-nation tournament championship after beating West Indies in the final. Bangladesh also faced a similar West Indies bowling attack in 2018. In that bilateral series, Bangladesh won that ODI series 2-1.These two series have given Rhodes confidence that Bangladesh batsmen are good enough to play the West Indies pace bowlers.

Bangladesh coach is happy with the way Bangladesh team has played the ODI cricket, against South Africa they faced pacers really well. But in the last match against England Bangladesh batsmen struggled against Archer’s extreme pace. Rhodes praised Archer in the press conference and admitted that he was too hot to handle.

“I am very happy the way we have played white ball particularly when it’s short. I think you have seen some of our games particularly against South Africa, that did not worry us. I think the England game was the class of Archer’s special pace. He is difficult to pick up as well,” Rhodes said.

Bangladesh will face West Indies on June 17, it’s a must win game for Bangladesh. As they have only 3 points on the board so far, to go through the semifinal win against the Windies in a must.

Rhodes expressed his concern about West Indian all-rounder Andre Russell. Rhodes praised Russell by saying that he is the best hitter that cricket has ever produced and it’s very difficult to ball at him.

“One of their explosive players is Andre Russell. And he is a formidable opponent. He is one of the best hitters in the game by far,’’ said Rhodes.

“It can be very difficult to bowl at him as he can take a game away from you,” he added.

The World has seen the power of Russell many times before. Recently he ignited the Indian Premier League (IPL) with his hard-hitting master class batting skills.

Russell has scored 510 runs in 14 matches in this year’s edition with an average of 56.67 while hit 52 sixes in that tournament so far, which is most by any batsman.

From these stats it is certain that for Bangladesh’s victory it’s very important to send Russell back to pavilion very early but West Indies is a team who are never short of hard hitters as they also have players like Chris Gayle, Carlos Braithwaite, Nicolas Pooran at their disposal.

Rhodes added that all-rounder Shakib Al Hasan of battled against England with an injury in his left thigh that eventually forced him to have some niggles though he insisted he will be fine before their game against West Indies.

Shakib, who appeared to be the lone warrior for Tigers against English bowlers, scored his maiden ton in the World Cup but his effort went in vain as other batsmen threw their wickets way.

“He picked up a little injury in that game against England. He fought on, battled on, extremely played well with his injury,” Rhodes told reporters at the pre-match press conference.

England gave Bangladesh a massive total of 387 runs. After the quick departure of Soumya Sarker, Shakib began to consolidate Bangladesh’s innings. In the 8th over of the innings, he felt strain in his left thigh.

Physiotherapist Thihan Chandramohon gave him some treatment after that incident. He played till 40 overs in that match and constructed a fantastic innings of 121 runs of 119 balls.

As his pain increased on Tuesday he was sent for a scan while his participation against Sri Lanka- the match that was abandoned due to rain- remained uncertain leaving the team management to a sleepless night.

But after the scan report that suggested he had nothing serious was received nothing serious except sustaining a grade one tear it appeared there is a sigh of relief in Tigers camp as it will certainly make him available against West Indies.