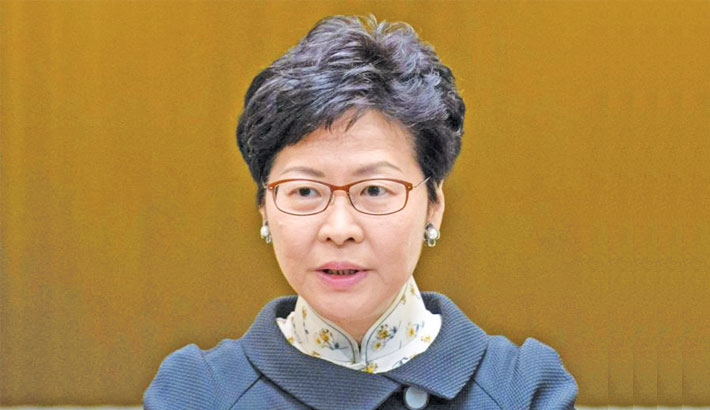 HONG KONG: Hong Kong’s leader hit out at protesters who battled police Wednesday calling the clashes “organised riots” in her first comments since violence broke out over her government’s unpopular plan to allow extraditions to China, reports AFP.

“The rioting actions that damage peaceful society, ignoring law and discipline is unacceptable for any civilised societies,” chief executive Carrie Lam said in a video statement, her first comments since the clashes erupted.

“Its obvious that these are not peaceful rallies, but openly organised riots,” she added. Meanwhile, former colonial ruler Britain urged the Hong Kong government to “listen to the concerns of its people” amid violent protests Wednesday against plans to allow extraditions to mainland China.

“The ongoing protests in Hong Kong are a clear sign of significant public concern about the proposed changes to extradition laws. I call on all sides to remain calm and peaceful,” Foreign Secretary Jeremy Hunt said in a statement. “I urge the Hong Kong government to listen to the concerns of its people and its friends in the international community and to pause and reflect on these controversial measures.

“It is essential that the authorities engage in meaningful dialogue and take steps to preserve Hong Kong’s rights and freedoms and high degree of autonomy, which underpin its international reputation.

“Upholding the principle of ‘One Country, Two Systems’, provided for in the legally binding Sino-British Joint Declaration, is vital to Hong Kong’s future success.” Britain handed control of Hong Kong back to China in 1997 on the basis of the Joint Declaration it signed with Beijing which guarantees freedoms in the semi-autonomous city until 2047.

Violent clashes broke out in Hong Kong on Wednesday as police tried to stop protesters storming the city’s parliament, while tens of thousands of people blocked key arteries in a show of strength against government plans to allow extraditions to China.