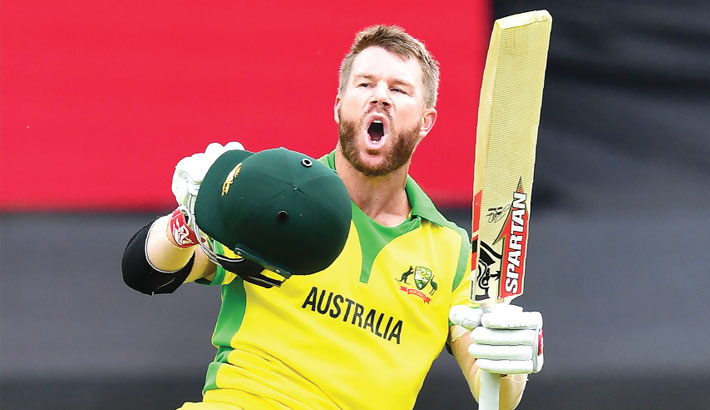 After being put to bat, Australia were dismissed for 307 in 49 overs against Pakistan. They were set for a huge total while Warner (107) and captain Aaron Finch (82) were sharing a first-wicket stand of 146 — the highest partnership for any wicket at this World Cup to date.

Warner made 107 — his first international century since he completed a year-long ban for ball-tampering. He fired his 15th ODI hundred before he fell prey to Afridi as he was caught by Imam ul Haq.

Then, Hafeez scalped Steve Smith (10) as he was caught at mid-off by Asif Ali.

All-rounder Glenn Maxwell (20) was castled by Shaheed Afridi in the 33rd over.

Amir then strick twice as he dismissed Usman Khawaja (18) and Shaun Marsh (23).

Nathan Coulter-Nile (2) was caught behind stumps by Sarfaraz Ahmed off Wahab Riaz’s bowling.

Amir completed his five-wicket haul as he scalped Alex Carrey (20) and Mitchell Starc (3) in the 49th over.

Amir became the seventh Pakistan bowler to pick up a five-wicket haul in World Cup history. He joined an elite list of Pakistan bowlers, including Wasim Akram, Shahid Afridi, Saqlain Mushtaq, Abdul Qadir, Wahab Riaz and Sohail Khan but became the first to achieve the feat against Australia in a World Cup game.

Amir had struggled for form in the lead up to World Cup 2019 but the left-arm pacer is on top the bowling charts with 10 wickets from 4 matches.

Amir’s form with the ball augurs well for Pakistan who face India in their next match on Sunday in Manchester.

Notably, Amir’s opening spell wherein he removed Virat Kohli and Rohit Sharma with 2 unplayable deliveries set up Pakistan’s big win over India in the final of ICC Champions Trophy 2017 in London in 2017.

Pakistan slipped to 56 for two in the 11th over. Fakhar Zaman fell for a duck when he cut Pat Cummins straight to Kane Richardson at third man.

Babar Azam was in superb touch, with 28 of his 30 runs coming in fours, before he failed to get over the top of a Nathan Coulter-Nile bouncer and was also caught by Richardson, now at deep backward square leg.

Pat Cummins was the most successful bowler for Australia picking up 3 wickets for 33 runs in his allotted 10 overs while Mitchell Starc and Kane Richardson took 2 wickets each for 43 runs and 62 runs respectively.

Australia’s David Warner was adjudged player of the match for his brilliant hundred.