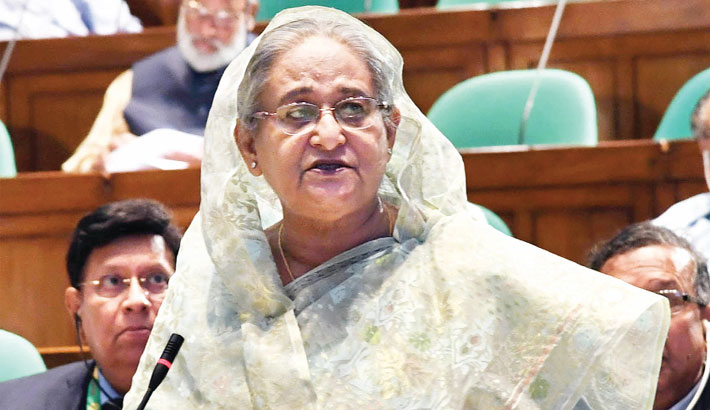 Prime Minister Sheikh Hasina on Wednesday said none irrespective of party affiliation will be spared if they are found involved in corruption.

“A miscreant is a miscreant in my eyes. Measures must be taken against them. Even none of my party men will be spared if found involved in corruption,” she told the House while responding to a supplementary question from Raushan Ara Mannan.

Mentioning steps against the wrongdoers, the premier said even corrupt members of the law enforcement agencies are facing action.

“We are taking measures immediately. Such measures will continue because it is very important for the society,” Sheikh Hasina said.

The day’s business began at about 5:15pm with Speaker Shirin Sharmin Chaudhury in the chair.

“The post of the prime minister is a tool to serve the people. I always try to change the lot of the people and the country by using this post,” the premier said.

Calling for maintaining the ongoing pace of development, Sheikh Hasina said all vices must be uprooted from the society.

“We’ll not commit any corruption and won’t allow anyone to do corruption. Both who take bribe and offer bribe are equally responsible and  will be brought to book,” she said.

In response to another supplementary question from Major (Rtd) Rafiqul Islam, she said her government will not spare well-off people too if found involved in committing crimes.

“A miscreant is miscreant in my eyes and measures will be taken against them,” she told the House.

Responding to a question on combating corruption, Sheikh Hasina said after assuming office for the third consecutive term, her government took a zero tolerance policy to build a corruption free country.

“Besides strengthening the Anti-Corruption Commission, awareness campaign will also be increased and modern equipment will be used to reduce corruption to zero level,” she said,

“The government is committed to improve the socio-economic condition and establish a welfare state based on good governance,” the premier added.

Sheikh Hasina said the ACC is an independent body, established by law and runs investigation of corruption allegation neutrally.

“At present, the enforcement team of the body conducts drives at various ministries and departments on specific allegations. As a result, the tendency of corruption among the employees has decreased,” she said.

The team also gives suggestions to the ministries and departments after finding out the reasons for corruption, she said, adding that incidents of corruption is gradually coming down due to the role of the ACC.