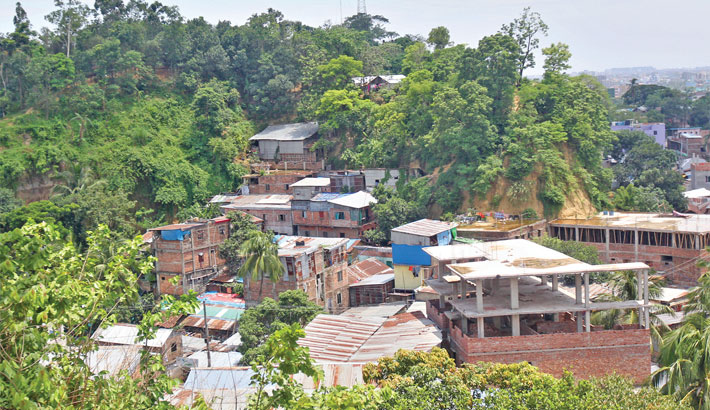 Houses have been built illegally on the slope of a hill in Motijharna area of Chattogram city. Despite the risk of landslide, many people are living in those houses. The photo was taken on Wednesday. — Rabin chowdhury

CHATTOGRAM: Although rainy season knocks at the door, hundreds of people still reside at vulnerable hill slopes and pockets putting their lives at risk in the port city and suburbs.

As the number of people living on risky spots increases, it is feared that there might be huge loss of lives if any disaster recurs.

Meanwhile, the district administration that works to save lives during disasters, is yet to find out a permanent solution to the crisis.

Preferring anonymity, a high official of the district administration, however, claimed that ‘political intervention’ is a must to permanently resolve the problem.

On June 13, 2017, torrential rains triggered a series of massive landslides in the hill districts, burying many dwellings when the dwellers were fast asleep.

A total of 164 persons were killed in the landslides in five districts of Chattogram, Rangamati, Khagrachhari, Bandarban, and Cox’s Bazar.

Of them, 120 people were killed in Rangamati, 35 in Chattogram, six in Bandarban, two in Cox’s Bazar and one in Khagrachhari.

This year, Chattogram district administration has identified 835 most vulnerable families living at risky foothills and pockets of 17 hills in the port city and its suburbs.

The high powered hill management committee formed after the 2007 devastating landslides in  its 19th meeting held on April 16 this year issued directives to the owners of the 17 risky hills to evict the encroachers within a month to minimise the casualty in landslide, if happens any in the coming rainy season.

Letters were already sent to the concerned hill owners in this connection.

Directives were issued from the meeting for disconnecting the utility lines at illegal settlements.

According to the member secretary of the committee and additional deputy commissioner (ADC-Revenue) Delwar Hossain, after sending letters, a committee was formed headed by the director of the Department of Environment (DoE), Chattogram (Metro). The assistant commissioners of land, local people’s representatives and representatives of hill owners were kept as members of the committee.

He stated that the committee would give the work plan and carry out eviction drives to ward off untoward incidents, if happen during rainy season.

“We usually make people aware about the problem and engage in evacuating people during inclement weather when the risk of landslide is at its peak.”

However, people again return to the spots after the drives, the ADC informed.

“In April this year, the magistrates who went to evacuate people and disconnect the utility lines faced obstruction by illegal occupants,” he said.

While visiting the risky areas like Akbar Shah Colony, Motijharna and Batali Hill where rain-induced landslides occur almost every year claiming valuable lives, this correspondent found that people along with their families was living in pockets, slopes and bottoms of hills..

People belonging to low-income group said they live there to find accommodation at a comparatively lower cost.

“There is no other place where accommodation is available at such a cheaper rate.” Moreover, they said their workplaces are also close to the place.

On April 3, a magistrate faced obstruction from people while returning with a power transformer after disconnecting power supply to illegal settlements in Lalkhan Bazar area.

The residents led by the leaders of both the ruling Awami League and its arch rival BNP took away the transformer from the magistrate. They also brought an allegation against the magistrate of disconnecting the legal supply lines.

Later, the magistrate was forced to leave the transformer under custody of a woman councillor.

The residents also blocked the busy Ispahani intersection of the port city on the following day.

When contacted, the newly-formed committee chief and DoE Chattogram (Metro) director Azadur Rahman Mollick told the daily sun that they evicted over 300 out of 835 families and disconnected many utility lines before postponement of the drive during the holy month of Ramadan.

“A meeting of the committee will be convened soon to resume the eviction drive,” he said.   Adding the casualties of 2017, at least 285 people were killed in rain-induced landslides and wall-collapse in Chattogram city and its hilly upazilas since 1998, sources informed.

Of them, the June 11, 2007 landslides left the highest number of 127 people killed in a single day in Chattogram only. On different occasions, the hill management committee made a number of recommendations like rehabilitation of vulnerable families to safer places, providing them with financial assistance, evacuation by hill owners, disconnecting illegal power, gas and water supply lines, filing criminal cases against illegal occupants and protecting hills and afforestation.

Failing to implement most of the recommendations, the administration now conducts eviction drives during rainy season.