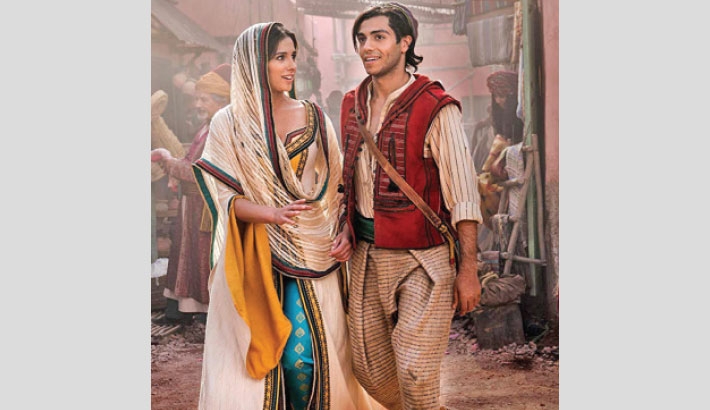 ’Aladdin’, the 1992 cartoon feature with Robin Williams as a garrulous blue genie, may not be the best movie from Disney’s second golden age of animation, but like the others it has durable charms and memorable songs. “Aladdin,” the new live-action re-whatever with a blue Will Smith popping out of the lamp, may not be the worst product of the current era of intellectual property exploitation. The combination of diverse casting and female empowerment themes results in a perfectly politically correct Aladdin for these times. The only thing that seems to have been left out is the magic, which is a bit of a problem considering that one of the main characters is a genie.

The screenplay, co-written by Ritchie and John August, adds a framing device in which the familiar story of Aladdin from One Thousand and One Arabian Nights is being told by a mariner (Will Smith) to his children. We are thus introduced to the tale of the title character (Mena Massoud), a petty thief in Agrabah, a city in an Arabian kingdom whose ruling Sultan (Navid Negahban) is preoccupied with finding a husband for his daughter, Princess Jasmine (Naomi Scott).

Jasmine, who chafes at living behind the palace walls, frequently ventures out into the city streets dressed as a commoner so that she can better understand the people. It’s on one of these excursions that she meets the roguishly charming Aladdin and his monkey partner-in-crime, Abu. Not long afterward, Aladdin is chased through the teeming streets by the Sultan's men, in the process demonstrating an uncanny ability for singing and performing amazing feats of parkour simultaneously.

Following Jasmine back to the palace, Aladdin encounters Jafar (Marwan Kenzari), the Sultan's trusted adviser who's secretly planning to take control of the kingdom. He forcibly enlists Aladdin to enter a magical cave and procure a lamp containing a Genie with the power to grant three wishes. In the course of carrying out the mission, Aladdin rubs the lamp and frees the Genie (Smith, in bright blue CGI form), who fulfills Aladdin's wish to be made a prince so that he can be worthy of marrying Jasmine and, well, you know the rest. 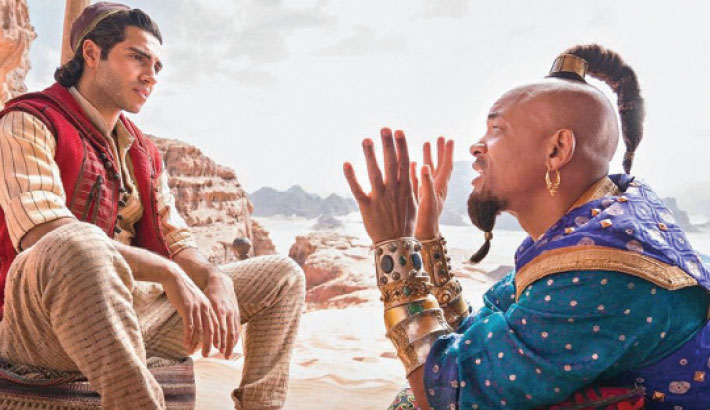 Massoud, who possesses the requisite lithe physicality and toothy grin, and Scott, who sings gorgeously, display a winning chemistry and charm that make the central love story fully engaging. Smith, faced with the impossible task of living up to Robin Williams' iconic voice performance, easily makes the role his own. His infectious personality shines throughout, and he even manages to infuse his martini-swilling Genie with moving emotional moments. Unlike the blubbery animated version in the original film, however, the CGI-rendered character here is so distractedly muscled and buff that you wonder how he was able to hit the gym so often while trapped in a lamp.

Kenzari and Negahban are fine as Jafar and the Sultan, respectively, while Nasim Pedrad is endearingly funny in the newly created character of Dalia, Jasmine's loyal handmaiden and best friend. But it's Billy Magnussen who nearly steals the film with his too brief but hilarious appearances as the bizarrely accented Prince Anders.

Ritchie keeps the film moving at a suitably fast pace, but everything feels obvious and telegraphed, including the obligatory monkey reaction shots designed for cheap laughs. A sequence in which the Genie saves Aladdin from death by drowning is staged so realistically that it may prove upsetting for younger audience members and seems a bit out of place amidst the magic-carpet flying and other fantastical interludes. The climactic showdown between the heroes and villains also feels overblown, more appropriate for a Marvel movie than a lighthearted Disney entertainment. Of course, none of these factors will prevent the film from raking in big bucks - although probably not as much as the upcoming redo of The Lion King.