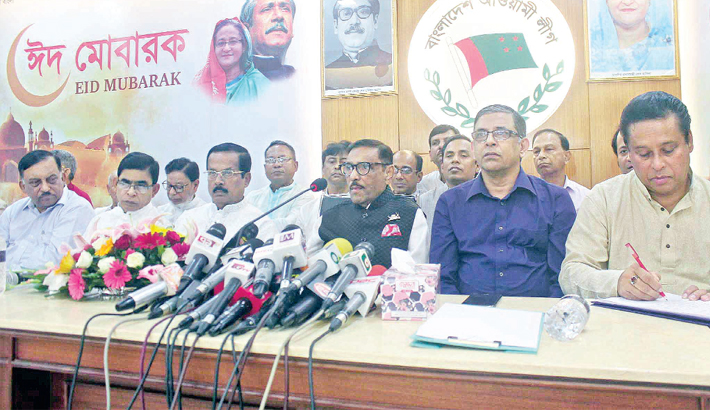 Road Transport and Bridges Minister Obaidul Quader speaks at the party’s office at Bangabandhu Avenue in the capital on Tuesday. -SUN PHOTO

Quader, also Road Transport and Bridges Minister, said this while briefing reporters after a joint meeting with party’s affiliated organisations at its headquarters on Bangabandhu Avenue at Gulistan in the capital on Tuesday.

“We want to see a responsible opposition. Apparently there is no unity among the allies in the Oikya Front, which is unexpected,” he said.

Responding to a query over international pressure on government over Khaleda Zia’s imprisonment, the minister said they are not facing such pressure from the international community to release Bangladesh Nationalist Party (BNP) chief.

“There’s no pressure from them but the BNP is repeatedly lodging complaints to the international communities,” he said.

BNP is repeatedly politicizing the issue of Khaleda Zia’s treatment, although doctors do not have any concern about her health, he also said.

“BNP has not been able to play a significant role in street movements and cannot do in the parliament. The party could not wage any movement during the last 10 years,” he added.

The party plans to mark the 70th founding anniversary of Awami League on June 23.

Quader declared that Awami League will celebrate the founding anniversary with a month-long programme. On the day, the national flag and Awami League’s party flag will be hoisted atop the party offices across the country and at Bangabandhu Bhaban at Dhanmondi 32 in Dhaka.

Leaders and activists of the ruling party will pay tribute to Bangabandhu by placing floral wreaths at his portrait in Dhanmondi. An AL delegation will place a floral wreath at Bangabandhu’s grave at Tungipara.

Awami League will host a reception for veteran, seasoned, and grassroots leaders at the meeting.

On June 25, Awami League will arrange a cultural programme at its central office at Gulistan, Hatirjheel, and Rabindra Sarobar.

The ruling party will also publish a special magazine to mark the 70th founding anniversary of the party, he said.