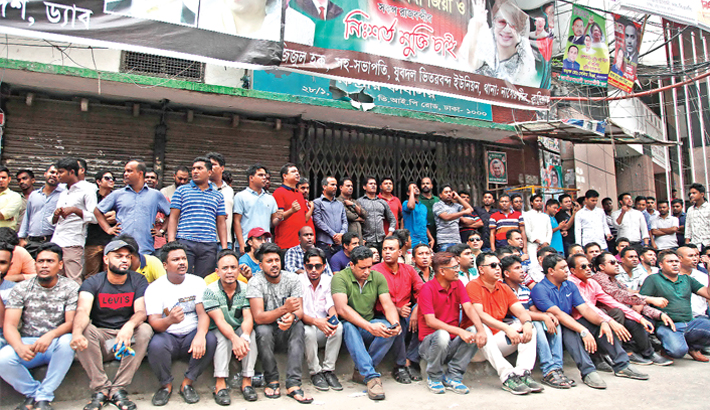 Agitating leaders and activists of the dissolved committee of Jatiyatabadi Chhatra Dal (JCD) take position in front of opposition BNP’s Nayapaltan central office in the capital on Tuesday, demanding cancellation of age limit for the JCD members in the new committee. – SUN PHOTO

Leaders of the dissolved committee of Jatiyatabadi Chhatra Dal (JCD) along with their supporters locked the main gate ofBangladesh Nationalists Party of Khaleda Zia’s (BNP’s) central office in the capital on Tuesday, demanding cancellation of age limit for the new committee members of the student body.

Witnesses said several hundred leaders and activists of the recently dissolved JCD central committee gathered in front of the BNP headquarters at Nayapaltan at about 11:00am and started demonstration there.

At one stage, they padlocked the main gate of the BNP head office and continued their protest programme.

The protesters chanted slogans in favour of their demand for cancellation of the age limit as requirement for formation of the new central committee of the JCD.

On June 3, a press release signed by BNP Senior Joint Secretary General Ruhul Kabir Rizvi dissolved the central committee of the associate student organisation of the BNP and said the new committee of JCD will be formed within the next 45 days based on the opinions of its councillors.

It said those who will contest different posts of JCD will have to be primary members, students of educational institutions of Bangladesh and must pass SSC and equivalent examinations after 2000.

The agitating JCD leaders claimed that such a decision about age limit of the leaders of the student organisation was taken to bring forth favourite candidates of a syndicate of some central leaders of BNP.

But BNP central leaders claimed that the process of forming the committee of Chhatra Dal is being carried out as per direction of BNP acting chairperson Tarique Rahman who has been staying in London for long.

Chhatra Dal central committee was formed in October, 2014 with Rajib Ahsan president and Akramul Hossain general secretary and the tenure of the committee has expired in 2016.

The agitating JCD leaders and activists staged a demonstration demanding cancellation of the age limit for JCD members in the upcoming committee of the student wing. They also expressed anger with Ruhul Kabir Rizvi who has been residing in the party office over one year and blamed him for the reported irregularity in the process of forming the new JCD committee. The JCD men also demanded that Rizvi leave the party office. They also drove away around 15 leaders and activists of BNP and its front organisations from the party office and snapped electricity connection during the demonstration that lasted till evening.

At one stage of the demonstration, BNP leaders Shamsuzzaman Dudu, Barkatullah Bulu, Amanullah Aman, Fazlul Haque Milon, Shahiduddin Chowdhury Annie and ABM Mosharraf Hossain went to the party office and tried to control the protesters but the Chhatra Dal men did not respond to them.

The JCD men were also engaged in an argument with the BNP central leaders, including party vice-chairman Barkatullah Bulu and organising secretary Fazlul Haque Milon, at the spot and barred them from entering the office. After talking with the protesters, Fazlul Haque Milon told reporters that the decision about the committee was taken by the party.

“Discontent and anger over the issue is not unnatural. We will hear the sorrow of the Chhatra Dal men and will inform Tarique Rahman about it to settle the matter,” he added.

JCD insiders said a large number of leaders and activists of the student organisation became angry with the BNP leaders due to dissolution of the old committee of JCD suddenly just before Eid-ul-Fitr.