Eid-ul-Fitr celebrated amid festivity in districts 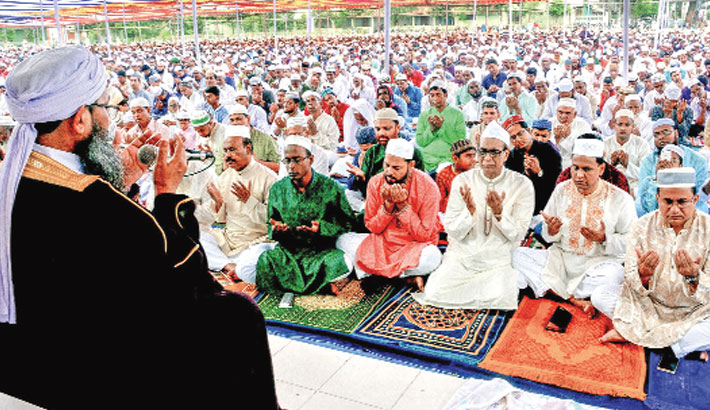 The Eid-ul-Fitr, one of the greatest religious festivals of the Muslims, is being celebrated across the country on Wednesday amid due solemnity, fervor and gaiety as the holy Ramadan, the month of fasting and abstinence, came to an end.

The very auspicious occasion began with the sighting of the Shawwal moon and reached the climax the morning amid offering the Eid-ul-Fitr prayers by millions from all strata of life at mosques, Eidgahs and makeshift prayer venues in the country.

During munajats after Eid congregations (jamaats), the Muslims also prayed for divine blessings to help strengthen national unity against all odds and destructive activities, including terrorism and militancy.

In Rajshahi: The holy Eid-ul-Fitr, the largest religious festival of the Muslims, has been celebrated in Rajshahi city with due fervour, joy, enthusiasm, gaiety and solemnity.

In the Wednesday’s morning, the Eid Day, streams of people rushed to the nearest eidgahs, mosques and open places to offer their Eid prayers braving the inclement weather, reports BSS.

Thousands of musallis at the end of Eid jamaats (congregations) offered special munajats seeking divine blessings and eternal peace of departed souls particularly their near and dear ones, continued peace, progress, and prosperity of the country as well as greater welfare of the Muslim Ummah.

In Gaibandha: The Eid-ul-Fitr, the greatest religious festival of the Muslims, was celebrated in the district as elsewhere in the country on Wednesday with due religious fervor, gaiety, solemnity and in a befitting manner.

The main Eid Congregation was held at Central Eidgah Maidan, adjacent to Shah Abdul Hamid Stadium of the town, on Wednesday at 9 am at the initiative of the district administration.

In Rangpur: Holy Eid-ul-Fitr, the greatest religious festivity of the Muslims, was celebrated amid huge enthusiasm, cheerfulness, religious fervour and solemnity everywhere in Rangpur division on Wednesday last.

Thousands of Musollis participated in the Eid-ul-Fitr congregations held at the Eidgahs, mosques, open places district and upazila towns and rural areas amid favourable weather.

The important government buildings, establishments and mosques were illuminated and the main streets decorated with various colourful flags bearing inscriptions ‘Eid Mubarak’ giving charming looks all around in the cities and towns.

In Netrakona: The main Eid jamaat (congregation) of the district was held at Netrakona Central Jam-e-Mosque at 9 am.

In Khulna: The main Eid Congregation was held at Khulna Circuit House Maidan in the city at 8.30 am.