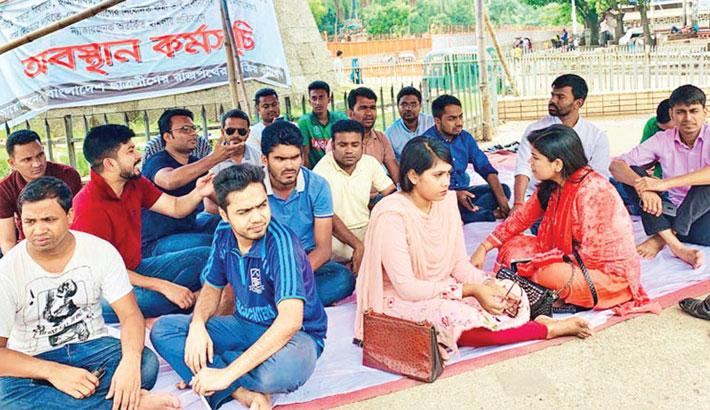 Post-deprived Bangladesh Chhatra League men stage a sit-in at the base of Raju Sculpture on the campus of Dhaka University on Monday. - SUN PHOTO

The faction of Bangladesh Chhatra League (BCL) who has been deprived of posts may continue their agitation on the day of Eid-ul-Fitr.

They were continuing their sit-in on the Dhaka University campus for the eighth consecutive days on Monday.

Although Awami League (AL) General Secretary Obaidul Quader on Saturday assured that crisis over BCL central committee will end soon through discussion, no steps have so far been taken.

The post-deprived leaders alleged that BCL central leaders are trying to save the controversial post-holders of the newly declared full-fledged central committee by not revealing their names.

Earlier, post-deprived BCL leaders began the sit-in on the campus protesting a fresh assault on them on May 20. They were allegedly assaulted by the followers of BCL General Secretary Golam Rabbani.

Spokesperson of post-deprived BCL leaders Murad Haider Tipu, also former Deputy Planning Secretary of BCL, said, “Each student has left the campus for their home villages. Even beggars and floating people of the campus have joined their family to celebrate Eid-ul-Fitr with their nearest and dearest ones. But we can’t go home this year.”