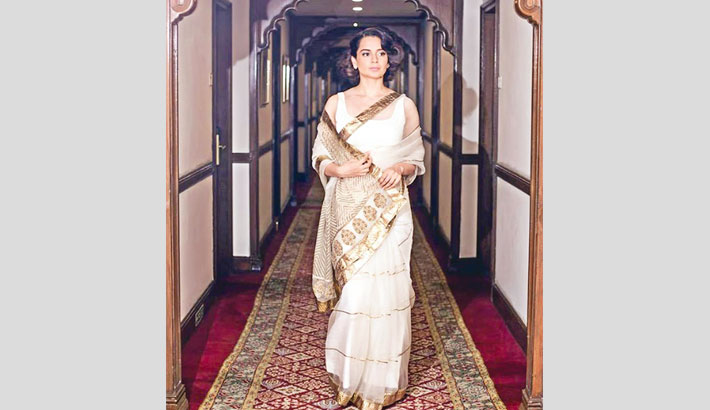 Kangana Ranaut sure knows how to carry her outfits confidently. The Manikarnika actress has a chic style sense and looks good in everything she wears. Kangana made a bold style statement while attending Prime Minister Narendra Modi's oath-taking ceremony in Delhi, reports mid-day.

She graced the event in a white sheer sari with a golden border and classic embroidery on the pallu. Her retro hairstyle and minimal make-up further enhanced her look.

Few actors who missed the event were Akshay Kumar, Aamir Khan and Hrithik Roshan who are not in the country at present, while Salman Khan, who was among the star invitees, was not able to attend as he was feeling under the weather.

Speaking about Kangana, this isn't the first time the actress has aced her fashion sense in traditional Indian wear. In the recently concluded 2019 Cannes Film Festival, the Manikarnika star was a sight for sore eyes sporting an exquisite Kanjeevaram saree from Madhurya, which she paired with a heavy golden corset

On the work front, Kangana was last seen in Manikarnika: The Queen of Jhansi. She is now awaiting the release of 'Mental Hai Kya' alongside Rajkummar Rao, which will hit the theatres on July 26.