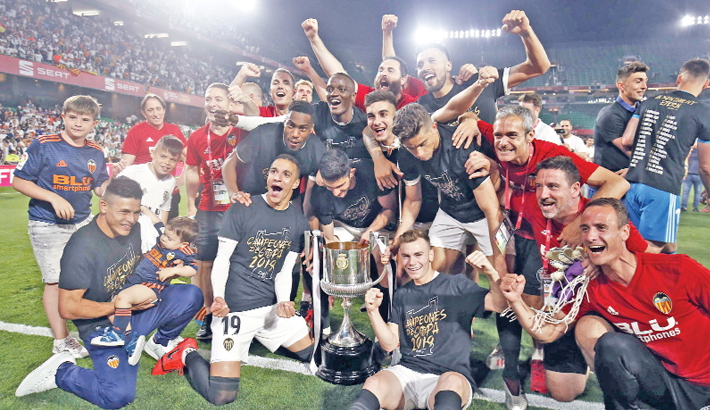 Players of Valencia celebrate with the trophy after winning the 2019 Spanish Copa del Rey (King’s Cup) final against Barcelona at Benito Villamarin Stadium in Sevilla on Sunday. - AFP Photo

Barcelona wanted a trophy to ease their Champions League heartache but instead fell to another shock defeat as Valencia pulled off a thrilling 2-1 victory on Saturday to win the Copa del Rey.

Chasing a record fifth consecutive triumph, Barca were undone by a relentless and gutsy Valencia side, who hung on after Lionel Messi pulled a goal back to set up a dramatic finish in Seville.

By then, Valencia were already two up, Kevin Gameiro and Rodrigo scoring twice in 13 frantic first-half minutes, after the latter spurned a golden early chance that could have spared them a nerve-shredding last 17 minutes.

Messi admitted on Friday his team had still not recovered from the “hard blow” suffered against Liverpool and certainly they seemed too easily disheartened here, finding their fight only once it was too late.

Valencia should have been ahead within five minutes, Clement Lenglet’s error sending Rodrigo clear but his finish was brilliantly scooped off the line by the recovering Gerard Pique.

Barcelona stirred before the break. Ivan Rakitic volleyed and then headed wide, before Messi registered their first shot on target in the 43rd minute.

There were 17 minutes to survive and with six left, Messi headed over. The Valencia fans roared and then again when Messi was dispossessed by a sliding challenge.