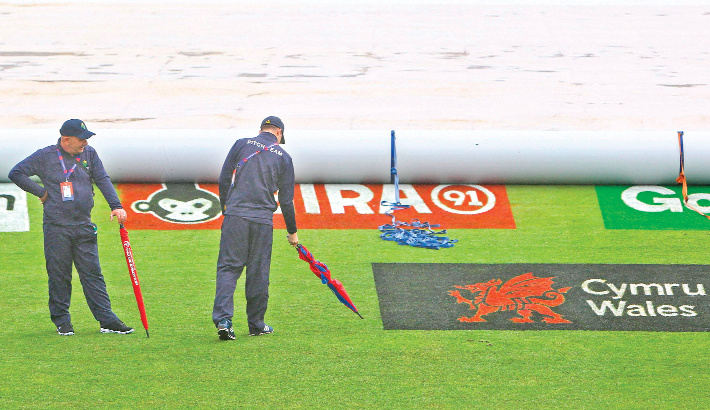 Grounds man check the state of the outfield as Bangladesh’s warm-up encounter against Pakistan was cancelled due to persistent rain at Sophia Gardens in Cardiff on Sunday. — AFP Photo

Persistent drizzle at Cardiff forced the cancellation of Bangladesh’s first warm-up game against Pakistan without a ball being bowled on Sunday.

Even the toss was not possible in the game in which Bangladesh eyed to fine tune the combination further and figure out what is imperative for the team.

Bangladesh however will get another chance to test their mettle before the cricket’s biggest extravaganza rolls on to the ground when they take on India in the second practice game on Tuesday, also at Cardiff.

Game against Pakistan was supposed to be Bangladesh’s first game after lifting the tri-series trophy in Ireland.

Bangladesh came into the match with perfect record against Pakistan in the last four ODIs. Just after the 2015 World Cup, Pakistan visited Bangladesh for a three-match ODI series and the Tigers whitewashed them in that series to genuinely establish themselves as proper cricketing giants.

Thereafter the two teams faced off each other in the Asia Cup in 2018, in which Bangladesh beat Pakistan by 37 runs. Mushfiqur Rahim became the first Bangladeshi batsman to fall for 99 runs while Mustafizur Rahman claimed 4 wickets in that match.

In Cardiff, Bangladesh also has hundred percent success rate. They had produced the biggest upset of the cricket history in this ground, stunning the then all conquering Australia by 5 wickets in 2005 and later in 2017 ICC Champions Trophy, they beat New Zealand here, recovering from 33 runs  for 4 wickets to secure a five-wicket victory, which helped them move into the semifinal.

Mashrafe is the only player of Bangladesh team to play those memorable matches in Cardiff.

However whether they could maintain the hundred success rate in Cardiff will be proved when they would take on India on Tuesday.

Bangladesh will start their World Cup mission, taking on South Africa at the Oval on June 2.