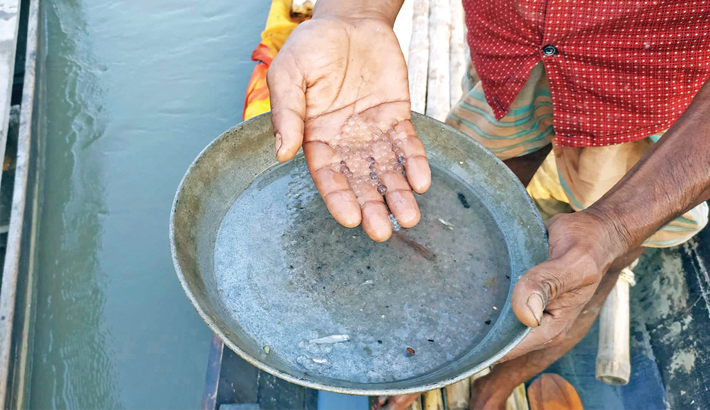 The egg collectors, who were eagerly waiting for the moment, collected around 9,000 kilograms of eggs till Sunday morning, sources said.

However, the amount of collected eggs is poorer this year compared to the previous occasion, they said.

Some 500 egg collectors on around 230 to 300 boats collected eggs from the river till 6:30am on Sunday, said the sources.

Approximate amount of the collected eggs would be around 9,000 kilograms to 10,000 kilograms (Kg) against the 22,680 Kg of the last year, said Hathazari Upazila Nirbahi Officer (UNO) Md Ruhul Amin.

Asked about poorer amount of the collected egg, the UNO said adverse weather is one of the main reasons for the situation.

“There was no significant rainfall and hilly onrush, which are very important for releasing eggs by the mother fishes, in the months of April and May this year” said the UNO.

However, the egg collectors expressed satisfaction with the catch and said the eggs they collected this year are of good quality, he said.

The egg collectors also started activities for hatching fry from the eggs at 113 government wells in three hatcheries and 141 privately-owned wells, said the UNO adding that the administration has kept close monitoring to facilitate the activities.

The collectors will get one kg fry from 60 kg of egg, he said adding that it is uncertain whether mother fishes will release egg further in this season.

During the months of Baishakh and Jaishtha (April and May), carp fishes start migrating from the Karnaphuli, Matamuhuri and Sangu rivers to the Halda river .

Usually, in the first rain of the monsoon, mother fish start releasing fertilised eggs in the river.

The fertilised eggs are released in several hundred wells dug out along the banks of the river for hatching.