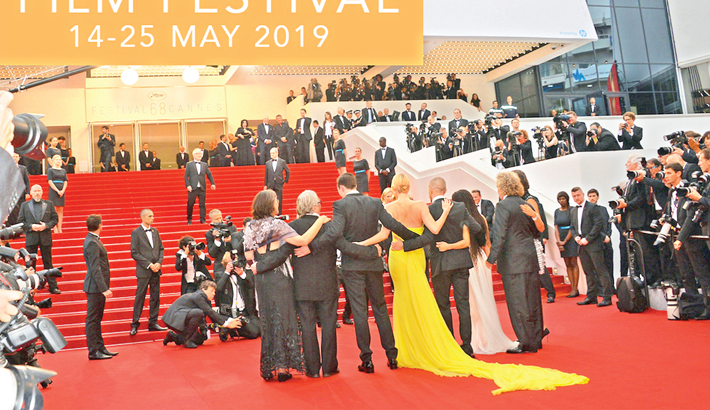 The Cannes film festival ends Saturday with the race for the Palme d’Or wide open and a cracking crop of movies vying for the top prize, reports AFP.

With the jury now deliberating in secret in a villa overlooking the Mediterranean, four films have emerged as the favourites from a field The Guardian described as “outstanding”.

The Spanish auteur Pedro Almodovar has made the running almost from the start of the 12-day marathon with his most personal film yet, “Pain & Glory”, in which Antonio Banderas plays an ageing gay director not unlike the maker of “All About My Mother”.

Almodovar, 69, has yet to win the Palme d’Or in six attempts, but has brought up the big emotional guns this time, with Penelope Cruz in the role of his mother.

Whether a jury led by the Oscar-winning Mexican tyro Alejandro Gonzalez Inarritu of “Birdman” and “The Revenant” fame will be swayed by such an array of Latin talent remains to be seen.

Nor is there much arguing with the star power of Quentin Tarantino’s “Once Upon a Time... in Hollywood”, which brings Tinseltown’s two most dashing leading men, Brad Pitt and Leonardo DiCaprio, together on screen for the first time.

Many critics loved the rollicking odyssey through the Los Angeles of 1969 in the period leading up to the Manson family murders, particularly Pitt’s performance as a hoary stuntman.

But there were haters too, and the French actress Emmanuelle Seigner fired a shot across Tarantino’s bows by complaining that he did not consult her husband, director Roman Polanski, whose murdered wife Sharon Tate is at the film’s heart.

Tarantino—who won the Palme d’Or 25 years ago for “Pulp Fiction”—collected the Palm Dog prize Friday for Cannes’ best canine performance, joking, “At least I do not go home empty-handed”.

But French director Celine Sciamma, 40, could easily make history by becoming only the second woman director ever to win the Palme after Jane Campion in 1993 with “The Piano”.

Like that film, her period lesbian love story is a slow-burner which packs a big emotional punch.

Campion only shared her prize with “Farewell My Concubine”, so if “Portrait of a Lady Burning” was to win Sciamma would be the first women to win outright.

Her film has already taken the Queer Palm for gay-themed cinema.

But competition is stiff, no more so from Bong Joon-ho’s “Parasite”, a fabulously funny morality tale about the widening gap between rich and poor in his native South Korea.

It got the highest score¨in the Screen poll of international critics—narrowly edging out Almodovar—with 11 out of 15 French critics surveyed by the magazine Film Francais also scoring it as the winner.

Stellar performances adds to its allure though some doubt if Cannes will reward a second Asian film dealing with a roughly similar theme two years in a row after Japan’s Hirokazu Kore-eda won last time with “Shoplifters”.